Students invited to find the beat of their own drum

ALAMOSA — Percussion fans of all sorts are encouraged to sign up for a new program at Adams State University to grow their musical skills. Taught by associate music professor Dr. James Doyle, the 18-week academy culminates in a concert on April 25.

Each class will focus on different, diverse percussion instruments. "We'll talk about the similarities across all of the instruments," Doyle said. "We'll do technique things that transfer from hand drums, to snare drums, to Guatemalan marimba, to Brazilian instruments, to concert percussion. At the end of the day, students are getting exposed to a lot of stuff."

Interested people don't have to be in band or have even picked up a drumstick before. As long as they're between ninth and 12th grades, including home schooled students, they'll be accepted into the program.

"By starting them out on steel drums, it's kind of an equalizer. No one has played them before. We can kind of bring everyone up to speed on the same thing and work on technique."

One of Doyle's former students came to ASU with no prior musical knowledge. He wanted to play the saxophone in high school but his parents couldn't afford one so he never joined band. At ASU he was able to learn how to read music, became proficient in percussion and is now working on his master's degree in musicology at The University of California in Los Angeles.

"He was like the type of student that I feel like gets overlooked often times because they don't have the money or the family support," said Doyle. "We want to be able to offer something to those students as well as the kids in the Monte Vista band or Alamosa band."

The academy is a learning experience for a group of Doyle's college students as well. The time they spend assisting him with the kids counts towards a service-learning requirement in their curriculum. For example, sophomore Delaney Armstrong, pictured above, will lead the students in a series of drum set clinics.

"It's preparing her for life after college," said Doyle, "while also benefiting the community while she's doing it, instead of her giving a hypothetical clinic to her peers."

A $25 registration fee that can be waived will equip students with drumsticks, a drum pad and a t-shirt, in addition to the class time and concert. Along with the donation of space and equipment by the ASU Music Department, the academy is supported by a grant from ASU's Office of Title V initiatives and the South Fork Music Association. The first hour and a half class starts Tuesday Nov. 7 at 7:15 p.m. in ASU's music building. Call Doyle at 710-587-7702 or email him at [email protected] to sign up. 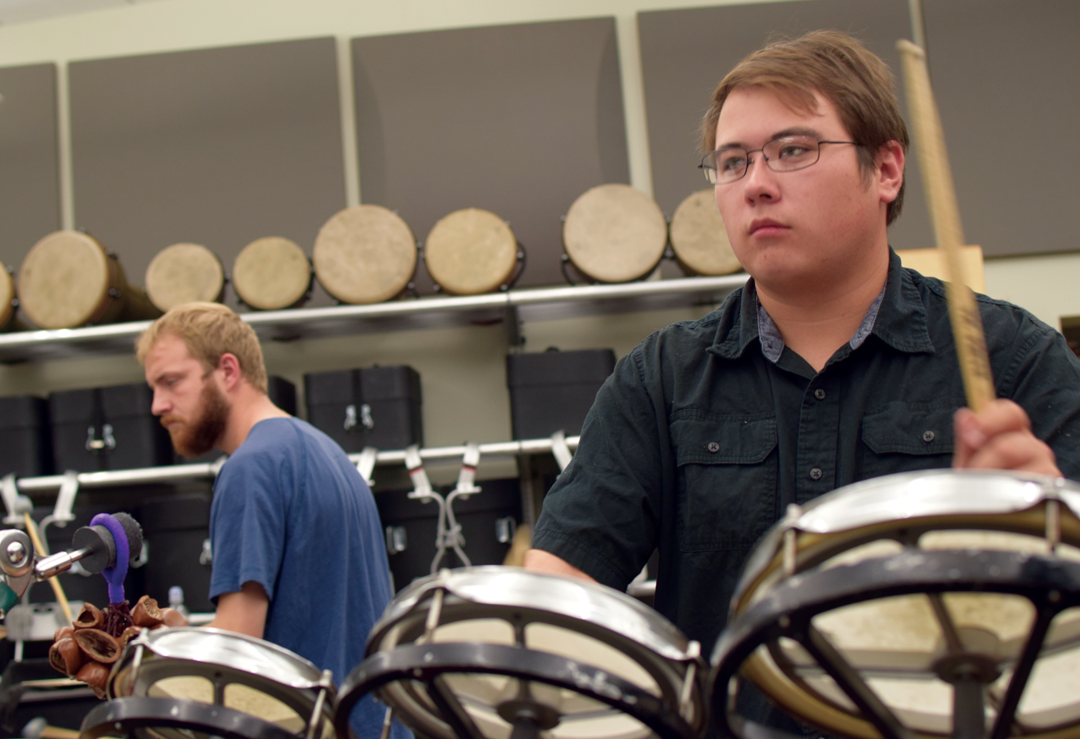 Adam State University seniors Dryden Hill, right, and Andrew Naughton play on their drums during rehearsal. Along with Delaney Armstrong and Kevin Johnson, the students will assist Doyle in teaching the high schoolers at the percussion academy.

Doyle hopes the program will grow into fully-fledged music academy that can educate K-12 students on all types of genres and instruments.

"There are a lot of students underserved musically," Doyle said. "If they're not in band then they don't have a musical outlet. This will hopefully provide that for any student."