ALAMOSA — After 40 years of serving the Valley, a chapter ends for Narrow Gauge Newsstand. The Main Street bookstore will be closing its doors Friday, March 2.

According to manager Christie Lindsay, the store is closing because their magazine distributor is going in a different business direction. Owners John and Mary Anne Duffy, who live in Steamboat Springs, could not be reached for comment. Lindsay said that the pair had 13 stores throughout the state and Al's Newsstand in Fort Collins will be their last once Narrow Gauge Newsstand closes.

"We used to be open from 8 o'clock in the morning to 8 o'clock at night with two people on shift throughout that whole time period and just be busy," said Lindsay.
"Now, we'll sit in here for hours and maybe one person will come in in three hours."

At one point the store stocked 5,000 unique magazine titles. They now have around 3,000 and it isn't feasible to stay open without the magazines.

"It was an integral part on how we operate and losing them is devastating," Lindsay said. "It's the magazines that bring people in."

The Alamosa native who attended Adams State University has worked at Narrow Gauge since 1999. She's had too many memories in her tenure to recount, but what sticks with her the most is observing readers grow up.

"What's been really enjoyable is to watch little toddlers and their parents come in throughout the years and now they're college students and they still come in when they're back visiting. It's just awesome to see that over years and to see the same people." 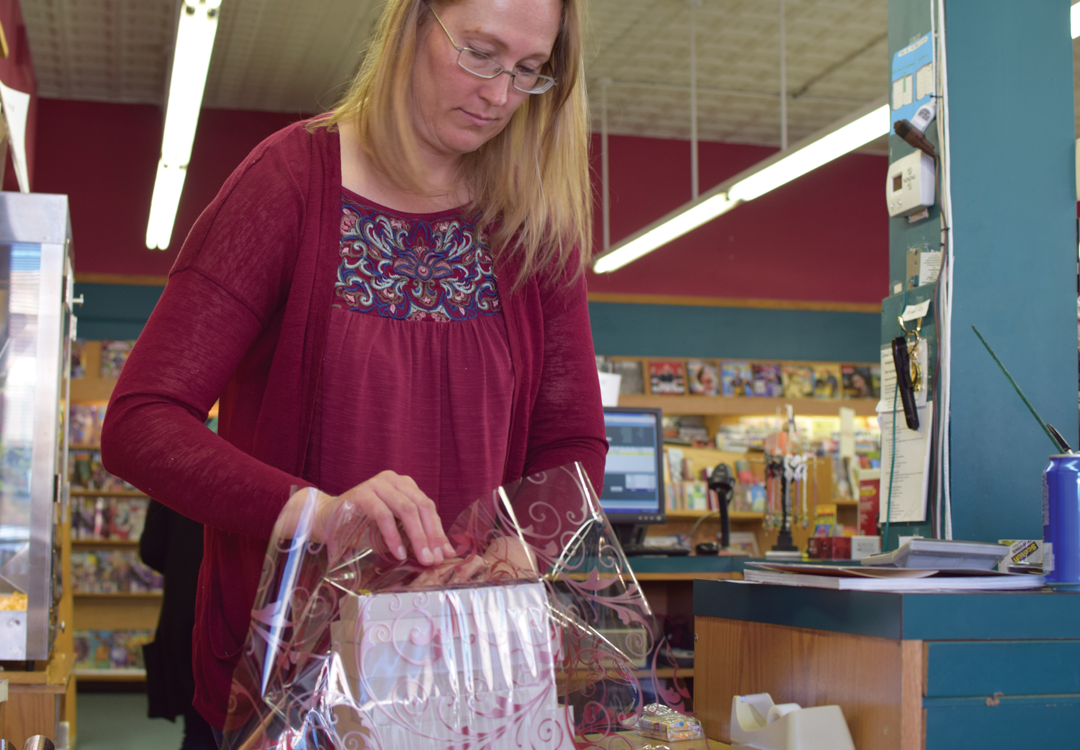 Narrow Gauge Newsstand manager Christie Lindsay wraps unsold inventory to be sent back to a distributor. Lindsay has worked at the store since 1999 and has been the manager for the past eight years.

As customers come in to take advantage of going-out-of-business deals or have one last bag of popcorn this week they'll see three different "books" in the windows paying homage to those loyal patrons. Their names will appear on the pages if someone has purchased over $2,000 worth of merchandise since the store got a digital database back in 1998.

"We wouldn't have ever survived as long as we did if it hadn't been for them," said Lindsay.

Though Narrow Gauge is leaving the station, a sequel is planned for the space. The discussions are in their early stages but Julie Mordecai, director of the Rio Grande Farm Park, wants to transform the corner into a cooperative bookstore. With the blessing of John Duffy, Mordecai hopes to sell new and used books, food and art supplies along with hosting events such as book clubs, writing workshops and book signings. The co-op may expand into the area upstairs and open temporary office stations.

"I think bookstores can be a place where people can gather and learn and write and buy books and create community," said Mordecai. "I don't want to lose this anchor in downtown Alamosa. But we're going to need help and volunteers."