ALAMOSA — Candidates for Alamosa city council dealt with some hot topics Monday evening during a candidate forum sponsored by the Valley Courier and Alamosa County Chamber of Commerce.

For example, contenders for mayor and Ward 2 and 4 seats, as well as unopposed at-large candidate Jan Vigil, responded to questions about their stand on the marijuana issues on the ballot this November.

Candidates also responded to questions about the recent American Civil Liberties Union (ACLU) report regarding the municipal court and specifically Judge Daniel Powell. City councilors shared with the public Monday night that Judge Powell, who resigned last week from the Monte Vista city judgeship, would not be seeking to renew his contract with the City of Alamosa at the end of the year.

For the most part, candidates were civil towards each other during the public forum, although during his opening remarks mayoral candidate and current councilor Ty Coleman accused Mayor Josef Lucero of improper behavior, disregarding his role under the charter and undermining protocol, which he said the city council had held several work sessions to address. This was the only time the issue was raised, and there was no further discussion, explanation or debate about it during the Monday candidate forum.

Responding to questions during the candidate forum Monday night in addition to Vigil, Coleman and Lucero were Councilor for Ward 2 Kristina Daniel and contender David Broyles and Councilman for Ward 4 Michael Stefano and contender Michael Carson.

Regarding the marijuana issue, some candidates said they believed medical marijuana had a place and filled a legitimate need in the community but were opposed to retail marijuana use.

Alamosa voters will be asked whether to allow medical and/or retail marijuana sales within the city limits and will be asked if they want to impose a 5-percent tax on retail sales, if they are permitted.

Lucero, who has been associated with the city council since the mid-1990’s and mayor for the past four years, said he would like to continue the good work currently underway in the city and would like to continue representing and responding to the needs of the citizens in the community. Regarding the marijuana question, he said although he wished Amendment 64 had not passed, it seems that the city is in a position where it will probably have to deal with it.

“I don’t necessarily believe it needs to be in the city,” he said, “but we are going to let the voters decide and whatever their decision is that’s what we will abide with.”

Coleman, currently serving as councilor and running for the mayoral seat, said he is excited to work on projects outlined in the city’s comprehensive plan that will enhance the quality of life in Alamosa and beautify the river corridor and wants to make sure city staff have the tools they need to perform their jobs effectively.

Regarding marijuana, Coleman said the marijuana issues on the ballot were citizen initiatives, and the decision would be up to the city voters.

“It’s going to come down to what you the people decide with regards to marijuana,” he said.

Ward 2 Councilor Daniel, who has served in that position for two years, said her role is to serve and represent the residents, and she wants to continue doing that with honesty and integrity and to listen to understand, not to argue. 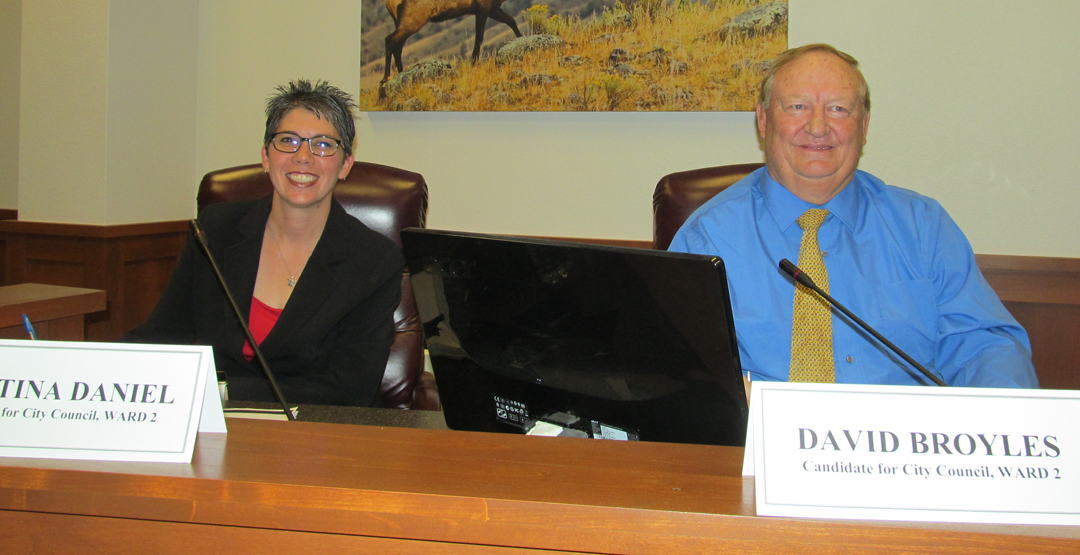 On the marijuana issue, Daniel said she feels this has divided the community and has been a hard issue for her, but she was glad Alamosa had people who were passionate enough to stand up and share their opinions on the issue. She said she did not know how she would personally vote on the issue yet and believed it was more complicated than a yes/no vote.

“I worry about what marijuana brings into the community, and I worry that people who need it and use it every day don’t have access to it,” she said.

Broyles, who is also seeking the Ward 2 seat, said he hoped to bring to the position his experience including 25 years in the banking industry and his service on various boards such as the recreation and Boys & Girls Club boards.

Regarding marijuana, which he said is still classified as a controlled substance, he asked, “What’s our vision for Alamosa? What kind of city do we want? Do we want higher crime that comes with increased drug abuse?”

He said marijuana is not going to make the community any better.

“I would like to see Alamosa be drug free,” he said. He opposed the sale of marijuana, which he called a recipe for disaster.

Councilor Stefano, a businessman who has served on council for four years, said he wanted to see the city provide more opportunities for youth such as the ice rink that is being constructed and which he has promoted.

Regarding marijuana, he said he was against it because he has used it and knows what it does to people.
“They say it doesn’t alter your brain, but I believe that it does, and it’s a gateway to other drugs,” he said. He added that as a businessman, he has trouble finding people to work who are sober. 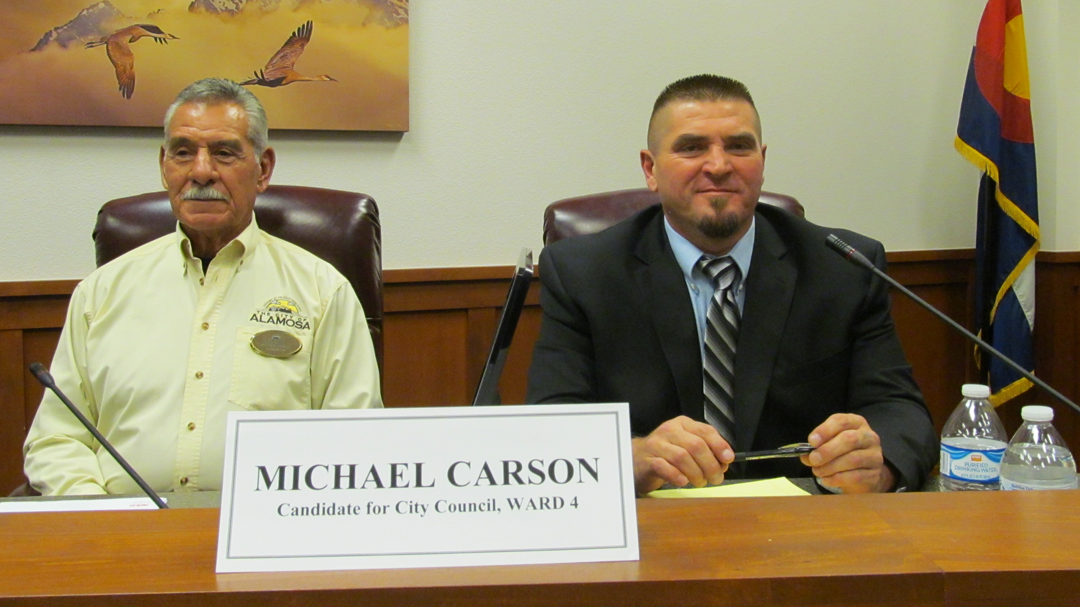 “I will do everything in my power to stop that drug abuse,” he said.  “I don’t have a problem with the medical marijuana if it really helps someone … I am against retail marijuana because I have seen what it does.”

Carson, also a businessman running for the Ward 4 seat, said he would like to help improve the city and bring balance to infrastructure improvements throughout the city because he feels like some parts of the city have been left out.

Regarding marijuana, he said, “I just don’t think our community has a place for it.”

He said if people want to buy it they could go 20 miles in either direction. He said he saw many negative impacts with allowing it in the city such as attracting more people to the community just for the marijuana.

“It poisons our community,” he said. “Keeping marijuana out of town should be a big push for all of us.”

Councilman Vigil, who has no opposition in seeking re-election, said he wanted to continue to be a catalyst for positive change in the community and would be glad to listen to residents’ ideas and concerns. 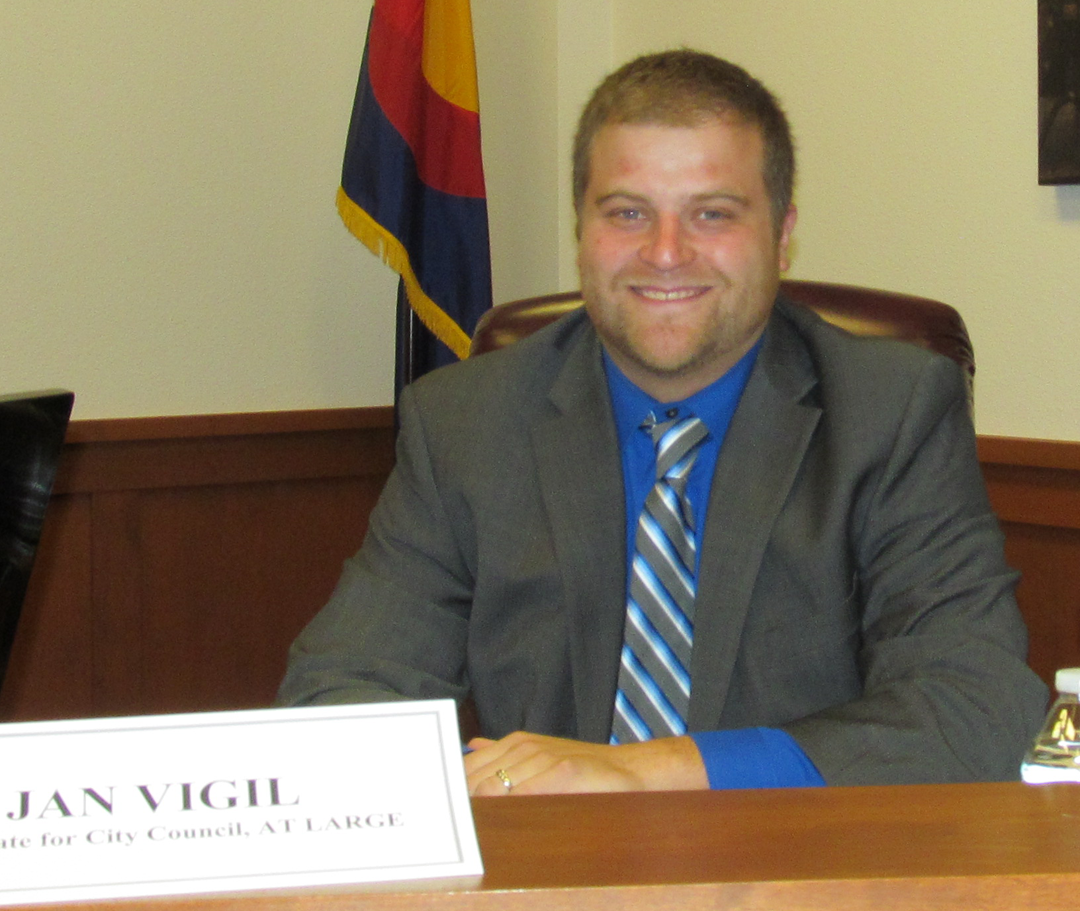 Regarding marijuana, Vigil said he would have liked to have seen this question on last year’s ballot because more people would have voted during a General Election. However, he said he thought it was a great idea that it was going to the voters now. He added that whatever the voters decide, “we need to accept it and move on.”

Judging the court
Regarding another hot topic Monday night, the audience questioned candidates about the recent ACLU report and what they would do if elected to monitor the municipal judge.

Mayor Lucero said some of the allegations in the report were true and some were not, and the council held a work session to discuss those last week. He said the council believes it would be a good idea to form a committee or task force to oversee the judge, and the council would be setting that up in the next few months.

Lucero said Judge Powell has told the city he does not want to renew his contract when it ends in December of January, so the city council will be looking for a new judge. Lucero said the council wanted the judge to be tough on crime, and he was, so the council needs to discuss how it wants to handle that issue going forward.

Coleman said the council took this matter very seriously and has not had that much time to process the report but will be taking measures to make sure the judge is monitored in the future. He added that his mom always said there were three sides to any issue, “your side, their side and somewhere in the middle there’s the truth,” and that was probably the case here as well.

“I think as a council we have to do due diligence to make sure we follow the right process and get as much information as we can.”

Councilor Vigil said he saw this as a great opportunity for the council to talk about what it wants in its next judge, someone who is hard on crime or tending more towards rehabilitation. He said the council has only met with the current judge twice in four years and could probably have done a better job giving him direction.

He added that creating a committee to oversee the judge was a good idea.

Councilor Stefano said he has known Judge Powell for many years and always believed he was a fair judge. He said his job is not an easy one, and from what he could see of Judge Powell, the judge had always been fair. He had given defendants many opportunities to pay, and it was unfortunate that a lot of them chose to spend their money on drugs or other things instead of paying their fines.

Carson said, “I think the best thing we can do moving forward is pay attention.”

He said he believed a judge could be tough on crime but do it in a way that does not belittle people. “He doesn’t have to be jerky about it,” he said.

He agreed with the idea to put together a judicial review committee.

Councilor Daniel said the city council needs to discuss how to proceed philosophically as well, for example how to hold people accountable and utilize diversion and treatment programs such as the restorative justice program.

Broyles said the answer is simple: Set up objectives and expect them to be met. He aid he did not think a committee needed to be set up.

“I am tired of committees. I think the city has too many committees.”

Other issues and questions from Monday’s candidate forum will be shared in future Courier editions.