By: Ruth Heide - Updated: 5 years ago

Rain forced the kickoff celebration indoors at the Colorado Welcome Center but did not squelch the excitement of the event.

He explained that an art committee and jury selected the final 17 pieces to put on display around Alamosa from among 116 artwork submissions from around Colorado and the nation. He commended the members of the committee for their efforts as well as staff members Jolene Webb, executive assistant, and Heather Brooks, city manager.

Councilman Charles Griego added his thanks to Brooks for bringing this long-discussed idea to reality. He said he had spoken with San Luis Valley and internationally renowned artist Huberto Maestas about doing more as a community to showcase local artists, and when the city hired Brooks as city manager, she took up the challenge.

Maestas added that the trend towards art in public places has been growing in communities around Colorado, and he was glad to see Alamosa adopt a program for public art.

“It’s something we can create and make our own and make it unique,” he said.

Maestas’ sculpture “El Pastor” is one of the 17 inaugural ArtScape pieces.

Artist Kasia Polkowska, a newcomer to Alamosa, is also one of the featured artists whose work with partner Kyle Cunniff can be viewed at the corner of Main and State. “Johona-Mai” reflects Polkowska’s Polish background in a tribute to the Native Americans who formerly inhabited the Valley, Polkowska explained during the kickoff ceremony. The colors in the sculpture reflect the Valley’s sun and blue skies, she added.

“It is truly an honor to have our piece chosen for the first time for this program,” added Cunniff. “We are really excited to be in the first round of this and excited to see where it goes from here.”

Mayor Lucero explained that the current art pieces will remain up for a year, and then another group will be selected for display in the city’s art on loan program. He added that any of the art pieces may be purchased, with a portion of the sales going back into the city’s ArtScape program.

Lucero said the art on loan program is a concerted effort to revitalize and reinvigorate the downtown area.

The city’s ArtScape program was appropriately launched during Alamosa’s 15th Artwalk, which is another effort to attract visitors to the downtown area, Lucero added.

David Montgomery, artist involved with the Artwalk, recalled when his father let him have some space above Kavleys for an art studio in 1976, which was probably the first art gallery in town. He said he was glad to see that expand over the years.

Several downtown businesses will host about 30 artists’ work ranging from paintings to fiber, pottery and music during the Artwalk, which continues today (June 3). Pick up a brochure at one of the participating businesses and get it stamped at as many locations as possible to enter a chance to win prizes. The drawing will be held today, Saturday, at 4 p.m. at Nestles. Winners must be present to win.

While enjoying the Artwalk, see Alamosa’s 1st Annual ArtScape art pieces in the downtown area. A map is available at the Colorado Welcome Center at the depot.

The community will have the opportunity to vote on a “People’s Choice Award.” Submit votes online at www.cityofalamosa.org this summer. The winner will be announced during the First Friday Art Hop on September 1. 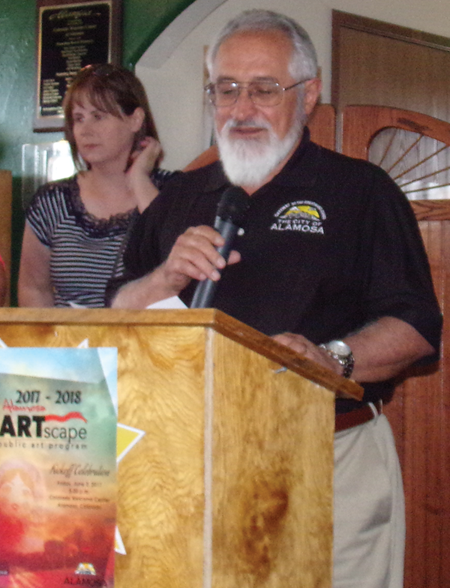 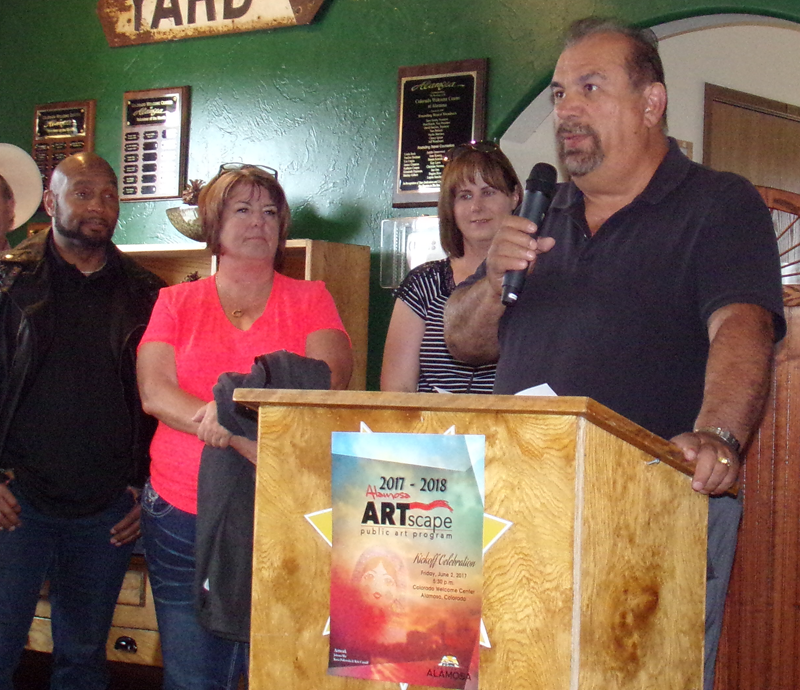 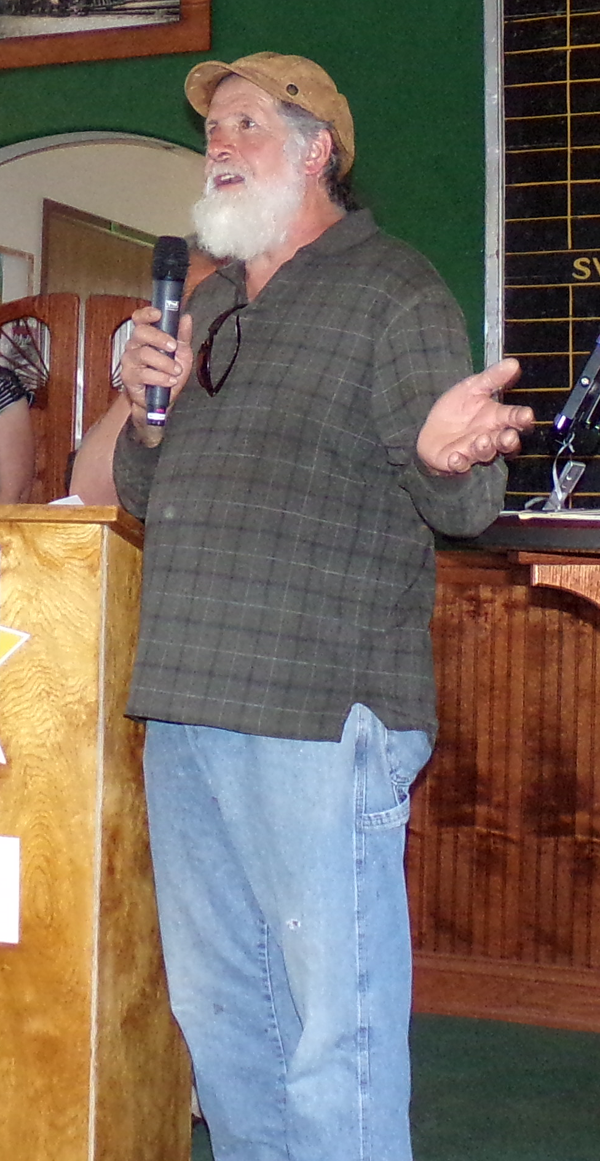 Huberto Maestas commended the City of Alamosa for joining other communities in developing a public art program. His sculptors are internationally known, and Alamosa’s first ArtScape includes his sculpture “El Pastor.” 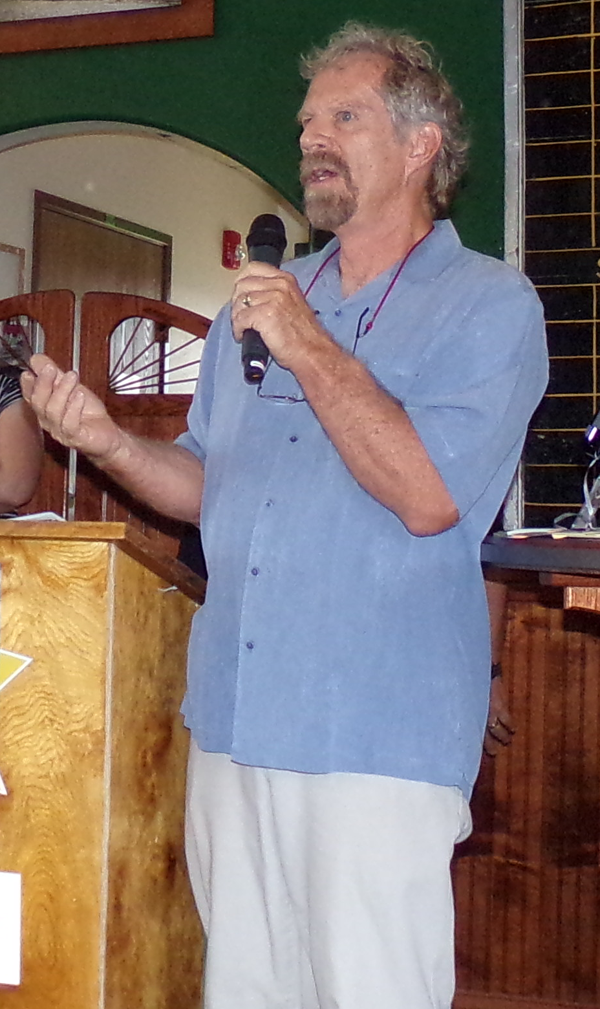 David Montgomery talked about how Alamosa’s art community has evolved and grown over the years. He is one of the participating artists in this weekend’s Artwalk in downtown Alamosa. 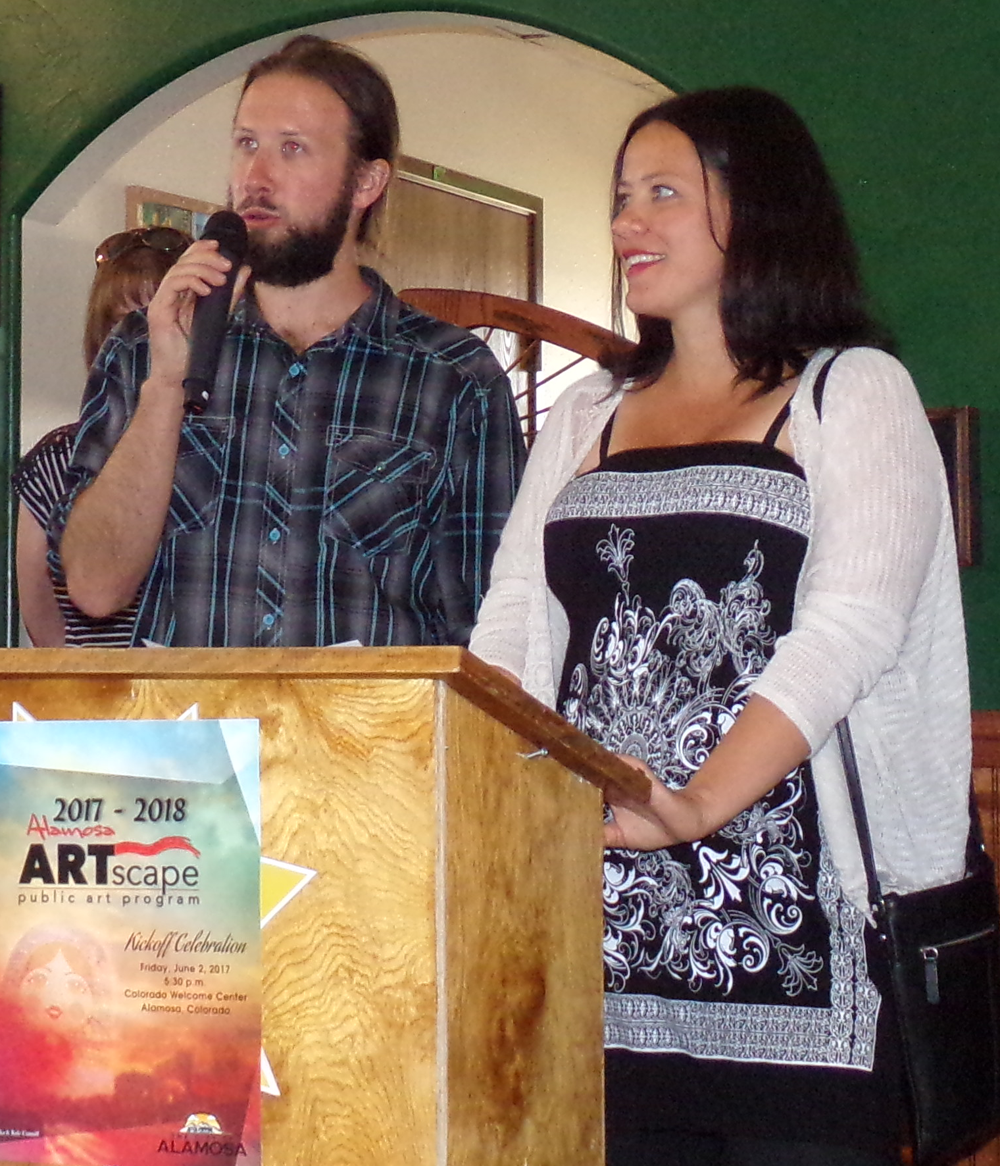 Kyle Cunniff, left, said he and Kasia Polkowska, right, were excited to be selected as one of the participating artists in Alamosa’s first ArtScape exhibit. Their piece, “Johona-Mai,” can be viewed at Main and State in Alamosa.