Brandon Buhr controls Remington Canfield as he prepares to roll him into an inverted cradle for the pin. Buhr led the Falcons with 29 points and took first place at 145 pounds

CENTER — The Center Vikings played host for the 2018 Valley Classic that welcomed schools from all over Colorado with a heavy focus on teams from the San Luis Valley. Centauri edged out Buena Vista by five team points to take first. Monte Vista also finished in the top ten as a team with a sixth place finish.

Centauri trailed going into the top placing matches but was lifted by their final wrestlers to eventually top Buena Vista. For Centauri first place finishers were Jeremy Coombs, Brandon Buhr and Brian Shawcroft. The Falcons also got two silvers from Bennie Chacon and Casey Fringer and tacked on a bronze from Zach Martin.

Centauri’s number one ranked senior Buhr defeated two top ranked wrestlers in 2A en route to topping the podium at 145 pounds and collecting a team leading 29 points. Coombs also registered plenty of falls to take a first place in the 120 E weight class. Shawcroft took his gold at 152 by an 8-2 decision over Jace Peebles from Hotchkiss. Centauri also registered fifth place finishes from Weston Huffaker and Zach Sandoval.

Tyler Vigil checks the clock during his first place match against Salida's Ryan Moltz. Vigil finalized his Saturday  with a 7-6 decision to take first place at 126 pounds.

Monte Vista earned sixth with the help of a number finish from junior Tyler Vigil. The Pirates also added a third place finish by Nicolas Garcia and a fourth from Jacob Chavez. Vigil sliced by Ryan Moltz in the first place match at 126 pounds by a 7-6 decision to give Monte Vista a team leading 27.5 points. Damian Cassanova, Jesus Vasquez, Ted Pacheco and Josiah Ramos also fought their way into fifth place matches. Cassanova and Vasquez left with fifth places combining for 22.5 team points. 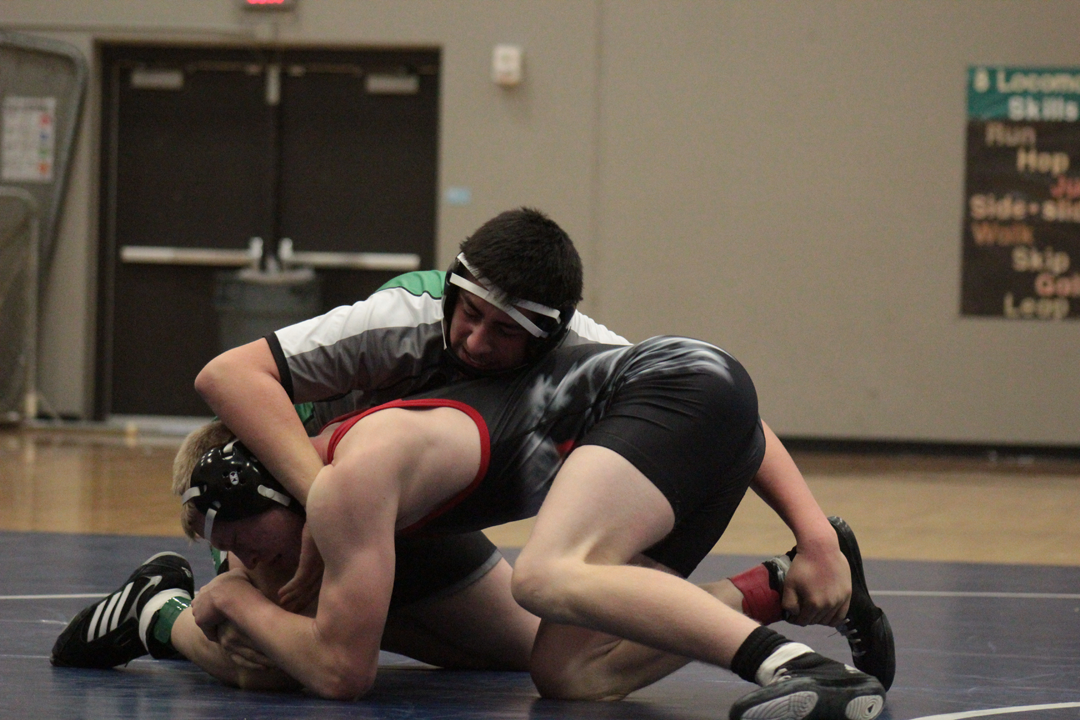 Max Mondragon looks for grip during his fifth place match at 195 pounds on Saturday. Mondragon along with Alejandro Velasquez helped spur Sierra Grande to a 15th place finish.

The Sierra Grande Panthers clawed out a 15th place finish with strong efforts from Alejandro Velasquez and Max Mondragon both combining for 20 team points. Velasquez placed 5th at 120 pounds via a forfeit while Mondragon dropped the fifth place match to Anthony Miller of Paonia to take sixth at 195 pounds.

Sanford was represented by Max Salazar and Gavyn Smith. Between the two of them they collected 25 points and placed 20th. Salazar had a great day at 106 pounds earning two technical falls and a pin on his way to the first place match. Salazar fell to Seth McFall of Fowler but left with second place. 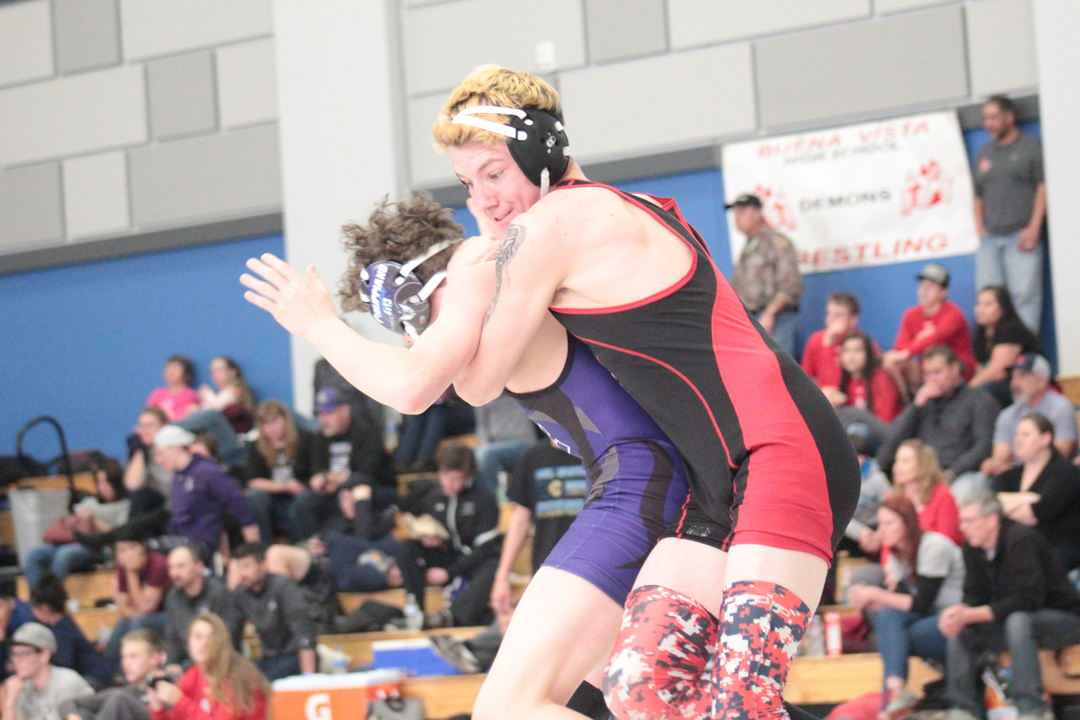 Isah Wellman steers Colton Sims to the mat during the third place match at 126 pounds. Wellman would take fourth place and lead Mountain Valley to a 19th place finish.

Mountain Valley had two wrestlers of their own that produced very well for having small numbers. Isiah Wellman and Salvador Vigil combined for 22 team points and took 19th in the Valley Classic. While Vigil would collect four points Wellman fell to the eventual champion at 126 pounds Tyler Vigil of Monte Vista. Wellman didn’t stop there and battled his way back for a third place match against Colton Sims of Rye. Wellman dropped a 14-10 battle of attrition and took fourth.

Sargent’s Farmers finished 20th with 18 team points. Caleb Rabon was the most productive wrestler on the team with a third place finish in 120 E. Rabon would rake in 15 team points to float the Farmers.

The host Vikings placed 21st overall with a team score of 16. Leading the team was Mario Chavez with seven team points. Chavez would pick up a win before facing the eventual champion at 152 Brian Shawcroft in the quarterfinals. In round two of the the consolation bracket Chavez would add another by fall before going out in round three to Jared Bauer of Crowley County.

Del Norte took 23rd place with 7 team points. Four of those were from the team leader Anthony Balderas. Balderas got a promising start by taking his opening match by fall but couldn’t capitalize on it moving forward.

It’s right back to work for everyone. Del Norte will travel to Walsenburg for a Tri/Quad hosted by John Mall Feb. 2. Center, Sanford, Mountain Valley and Sierra Grande will take part in a tournament hosted by Crowley County on Feb. 3. Sargent will take part in the Charger Invitational also on Feb. 3.