Tigers and Indians are the story of 2A

Taylor Larson drives to the hoop for Sanford during the Indian's district quarterfinal victory over Sargent on Thursday. (Photos courtesy of Aaron Parrill)

MONTE VISTA — At the Monte Vista High School eight teams from 5 schools duked it out for district supremacy.

Del Norte’s girls took down Custer County in a 70-36 game. The Tigers would trail Custer County at the half but a strong third quarter would help them take the lead back. Kendra Parra polished things off with a 9-point fourth quarter. Parra was Del Norte’s leading scorer adding 20 points to the Tiger’s total.

Sanford’s girls slipped by Sargent by a score of 29-25. Sanford was led by Mackenzie Peterson and Taylor Larson, both girls registering 9 points each. In a game that was back and fourth Sanford found an edge in the third quarter. Both teams slowed after the break with Sanford getting five points and Sargent failing to register any.

That quarter would be the Farmers undoing as four points decided the game. Sargent junior Lainie Dillon led the Farmers in scoring with 8 points getting six of those from the free throw line. 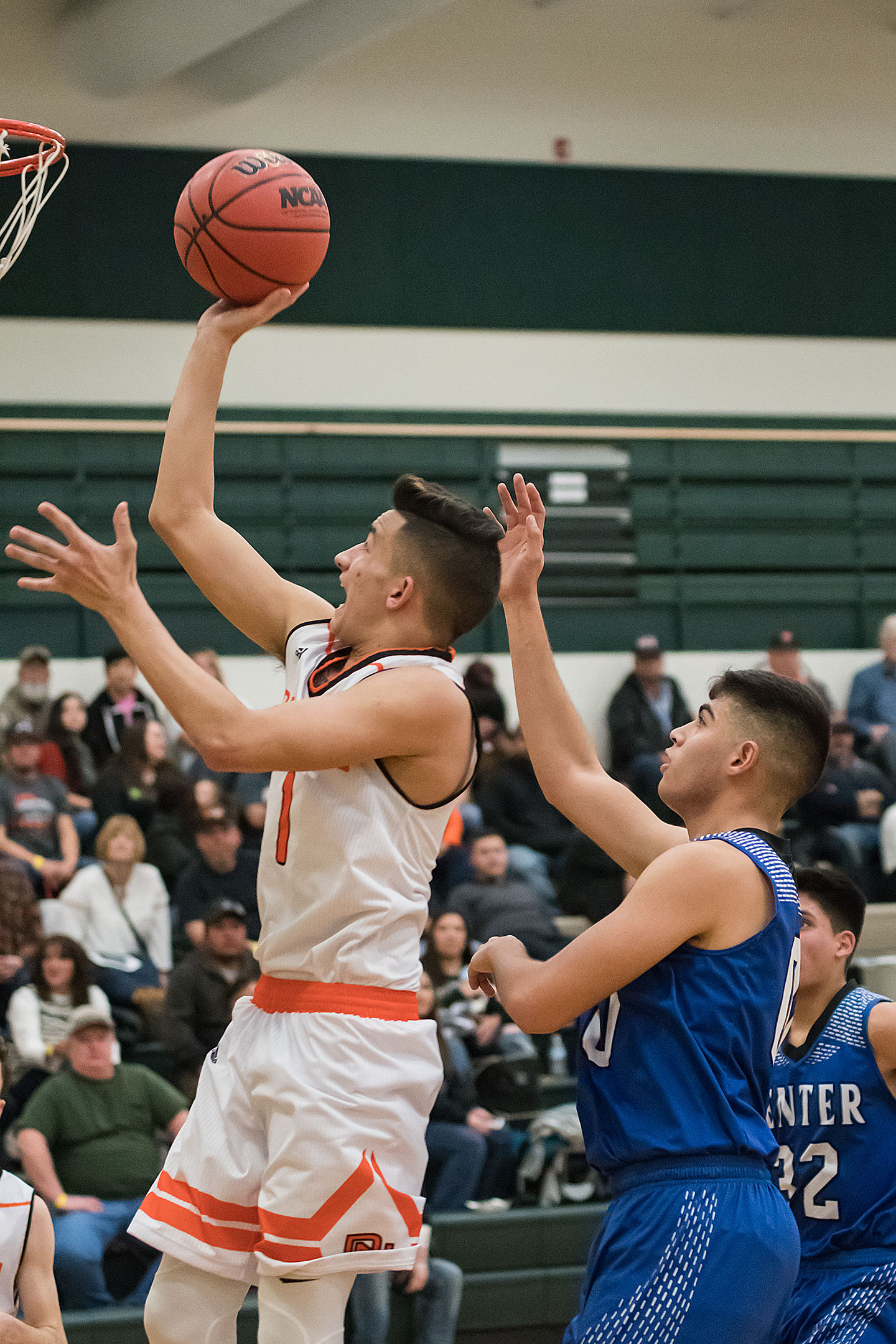 Izeah Chillson-Peterson (left) of Del Norte floats to the net and past the Center defenders during the 1A District 1 semifinals. Del Norte and Sanford will settle their rivalry in front of viewers in Plachy Hall on Friday Feb. 24.

On the boys' side of things, nothing changed in the win columns. Del Norte made sure not to underestimate Center this time around barreling through the Vikings in a 70-36 game.  For Del Norte Izeah Chillson-Peterson took the pressure off Carlos Parra by having his best game of the recorded season with 25 points. Parra still got his points registering 18 of his own as the Tigers rolled to into the district championship.

While Sanford’s boys also prevailed over the Farmers in a 50-45 affair. Sanford had a fight on their hands given that a point separated the two teams after one, the Indians leading 11-10. In the second quarter the Farmers slowed to a crawl with all three of the teams points coming from Ryan Davis. Davis was second on the team in scoring with 9 points.

The Farmers would strike back in the third with 15 points. Eddie Gonzalez would lead the Farmers with 10 points. Even outscoring the Indians in the third wasn’t enough to make up for Sargent’s ineffective second quarter. Maguire Peterson would score 13 points leading Sanford to the win and the district championship.
Del Norte will face Sanford in both district championships at Adams State on Feb. 24. The winners will get a guaranteed ticket to the regional tournament. The loser will have to rely on RPI standing for their chance at regionals