SANFORD — Sanford basketball welcomed the ailing Vikings for a non-conference game. Both the girls and boys from Sanford took decided victories; Sanford’s girls took a 64-14 victory, and the Sanford boys followed suit with a 63-22 win of their own.

Sanford’s girls have been chasing Del Norte in the 2A Southern Peaks league. The girls from Sanford (11-5-0) have been doing a good job having collecting two straight wins entering their contest with the Vikings on Thursday. The lady Vikings (2-13-0) earned a win to close out January against South Park, however before they had the misfortune of opening February with a loss at the hands of Del Norte.

The Vikings would trail Sanford 9-4 late in the first. Led by a 9-point first quarter from junior Nykia Ruvolo, Sanford would advance to a 16-6 lead to close the quarter. Ruvolo 13 -points led the Indians in scoring on the night. Even more impressive she would collect all of her points within the first half.

Another 16-point quarter from the Indians made for a 32-9 score going to the break. Caitlin Paine would come on late adding all of her 10 points in the third quarter. Paine surpassed her 'points per game' average (4.5 PPG) during her second best scoring game of the season. With two minutes remaining in the third the Indians would crack a 36-point deficit effectively forcing a running clock en route to the win. 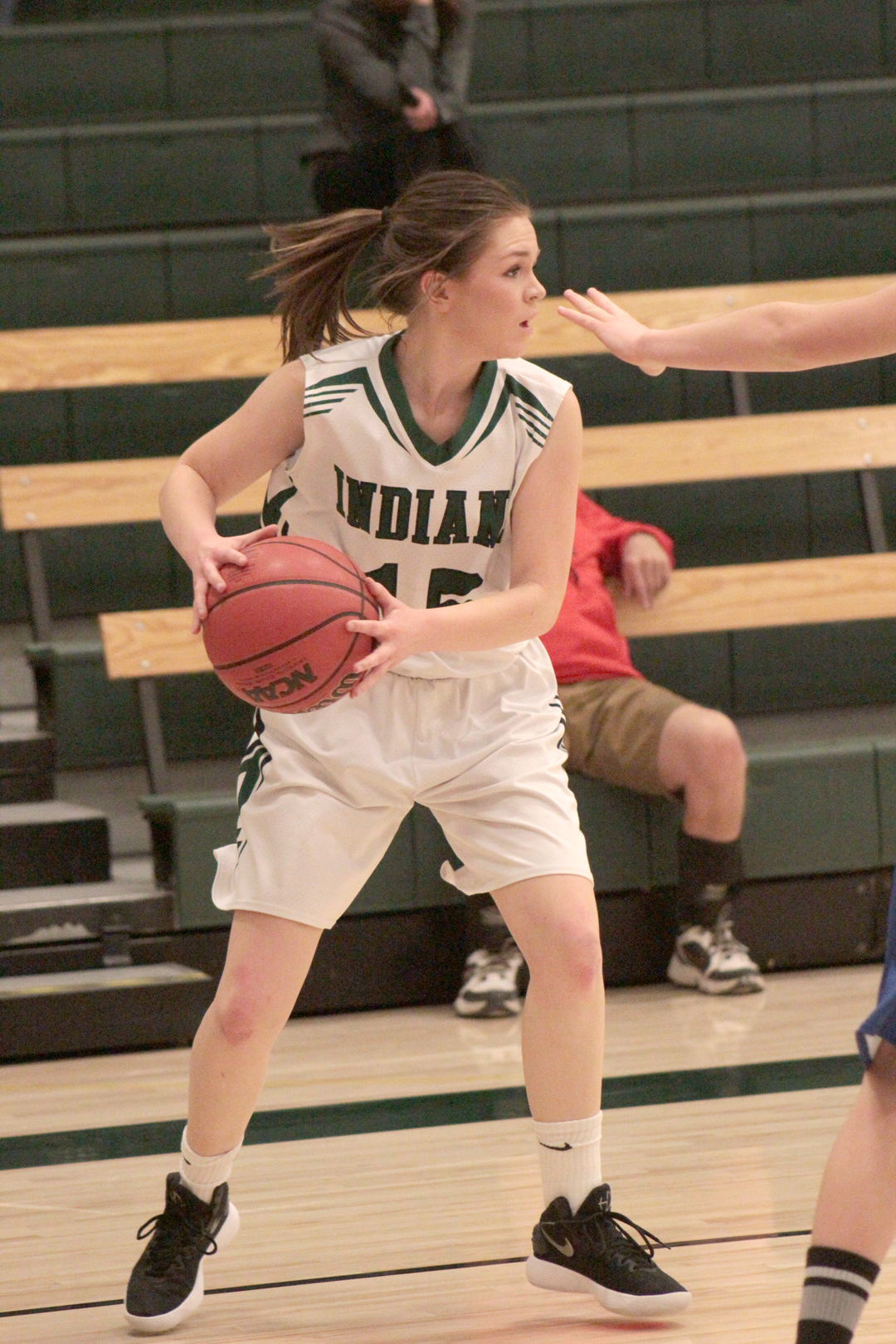 Caitlyn Paine prepares to swing a pass around the arc. Paine was second on the team in scoring with 10 points, which she collected entirely in the third quarter.

The Sanford boys’ (12-5-0) current situation closely resembles the girl’s. A two win streak entering Thursday and the Tigers in their sights. The Vikings picked up their third win of the season at Crested Butte’s expense on Jan. 20.

Maguire Peterson took the tip off and put Sanford on the board, immediately establishing a lead they would never relinquish. There was plenty of room on the fringes, as Peterson would hit two from the 3-point line in the first quarter. Guy Larson got in on the action hitting one of his own as the Indians ran out to a 19-6 advantage to close out the first quarter.

Peterson and Larson would each hit three 20-footers before the final buzzer sounded adding to the Indian's seven total. Seven more points from Peterson and another 19-point quarter would have Sanford in complete control 38-10 to close the first half.

Center came out in the second half ready to try and dig out of the hole they were in. Back-to-back baskets from Devin Porres and Evan Hurtado salved the wounds for a while, but Center’s situation was far too dire. Sanford didn’t slow down, forcing a running clock late in the third off Thad Jackson’s free throw. Sanford rode out the clock to take their twelfth win of the season.

Up next for Center will be a game in La Veta tonight featuring for the girls only. While both teams will participate in a home contest against Custer County on Feb. 16. Sanford will up with Sargent for some basketball on the road starting at 3:30 p.m. on Saturday Feb. 10.