Rescue crew and tools at work

Alamosa firefighters used the Jaws of Life and other tools to remove the roof of a car in a matter of minutes after a rear-end collision at the corner of the 10 South and Road 106 about 2 p.m. Wednesday. The driver of this vehicle apparently was partially ejected after flying over the backseat and window onto the crumpled trunk lid. The driver of the other vehicle didn’t appear to be seriously injured. Both vehicles involved in the rear-end collision were apparently eastbound on the 10 South when the mishap occurred. The identities of the two victims involved were not available at press time. 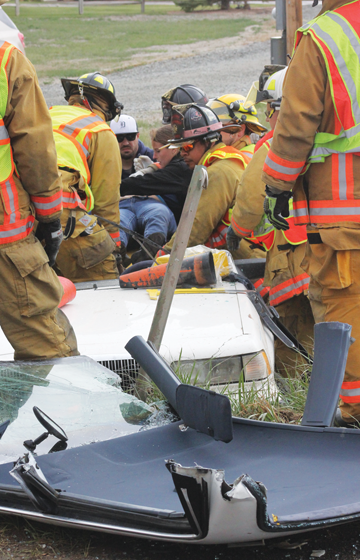 The victim of a two-car accident at the intersection of the 10 South and Road 106 in Alamosa County is tended to by an EMT and Alamosa firefighters as she is removed from her vehicle about 2 p.m. Wednesday.