VALLEY — Zebulon Montgomery Pike was a prolific writer, documenting everything from his foray into unknown territory. He was also either a fellow who got lost looking for a specific river or a deliberate spy in Nueva España.

He is still an important part of San Luis Valley history and folklore. The Conejos Board of County Commissioners April 6 passed a resolution supporting what is currently called the Pioneers Trail. The Pike National Historic Trail Association is working on the trail, which winds around the country until it ends in Colorado.

At the time of the Pike expedition, everything south of the Arkansas River was controlled by Spain, but President Thomas Jefferson considered the entire watershed of the river as United States territory and Gen. James Wilkinson ordered Pike to see what was there. All told, he covered 8,200 miles of uncharted territory.

His interesting journey and prolific writings are in a collector’s edition of “The expeditions of Zebulon Montgomery Pike to Headwaters of the Mississippi River, through Louisiana Territory, and in New Spain, during the Years 1805-6-7,” donated to the San Luis Valley Museum by James C. Bull, an attorney residing in Arroyo Seco, N.M.

Noting that he has other rare books, Bull said, “You can’t take them with you at the end. You need to find a new love and home for them.” The book was popular and not only printed in English, but French Dutch and German.

The aged book was featured in a presentation ceremony at the museum Sunday afternoon and Bull pointed out that the book wasn’t Pike’s actual papers, but an 1810 printing of his report to Jefferson. It was done from memory, since the Spanish confiscated all of Pike’s materials and held them, even after he was sent back north.

Bull said he decided to donate the book to the San Luis Valley Museum since Pike was discovered by the Spanish in the Valley and escorted to Santa Fe. “They invited them to a fandango,” Bull jokes.

The Spaniards promised to assist the men of Pike’s party who were still absent from the stockade he and his men had built to weather out a rough winter alongside the Conejos River — far from their target waterway, the Red River.

Pike's military career included working on logistics and payroll at a series of frontier posts, including Fort Bellefontaine near St. Louis. Gen. Wilkinson, appointed governor of the Upper Louisiana Territory and headquartered there, became his mentor.

In 1805, Wilkinson ordered Pike to find the source of the Mississippi River, so Pike traveled into the northern Louisiana Territory, newly purchased from France. More than 100 years later, France released official records showing Gen. Wilkinson received personal trade concessions and thus could have been labeled a spy for Spain at the time.

After Pike returned from this first expedition, Wilkinson almost immediately ordered him to mount a second expedition to explore, map and find the headwaters of the Arkansas and Red Rivers. Additional objectives of this exploratory expedition into the southwestern part of the Louisiana Territory were to evaluate natural resources and establish friendly relations with Native Americans.

Beginning July 15, 1806, Pike led what became known as the "Pike Expedition.” In early November of the same year, Pike and his team sighted and tried to climb to the summit of El Capitan, a peak later named after him, Pikes Peak. They made it as far as Mt. Rosa, located southeast of Pikes Peak, before giving up the ascent in waist-deep snow. They had already gone almost two days without food.

Academics and historians still argue whether Pike mistakenly or deliberately wandered into Spanish territory. Had he made an honest error in mistaking the Rio Grande for the Red River or had he deliberately committed trespass to spy on the Spanish as part of his orders from General Wilkinson?

Pike’s recollections make no mention of his fears should he be trespassing, but the rescue of his men stranded between the Arkansas stockade and his present position seems to have weighed heavily on his mind and he developed his plans accordingly.

They found what became Medano Pass and Pike writes that they were greeted by a unique landscape: the ocean of sand that comprises today’s Great Sand Dunes National Park & Preserve.

They spent the rest of the day angling south between the dunes and the western face of the mountains. At their camp that night, Pike climbed one of the towering dunes and turned his spyglass west. He spotted a large river, flowing southwest, in the manner of the Red.

By January 30, they were standing on its banks. What they did not realize was that they were on the banks of the Rio Grande, had crossed into land controlled by imperial Spain, and Pike was now a trespasser in the territory controlled by Spanish New Mexico.

The expedition moved downriver to locate a stand of timber suitable for building a substantial stockade for a base camp. On January 31, they decided on a location five miles up the Conejos River, a western tributary of the Rio Grande. To protect them from the “insolence, cupidity and barbarity” of any nearby tribes, they immediately set to work on the stockade. Constructed of heavy logs and complete with a defensive moat, it was built on a square plan, with walls approximately 36 feet to a side, and 12 feet high. 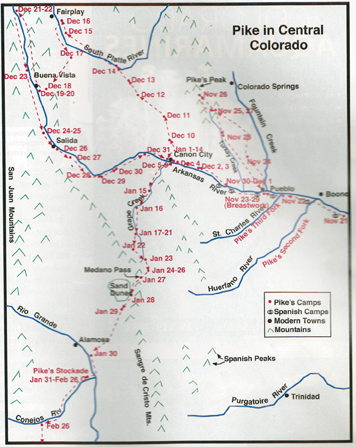 By Feb. 7, the work was apparently complete enough to allow Pike to order a five-man detail back through the mountains to retrieve the frostbitten men. While Pike and a companion were out hunting, they met a Spanish dragoon and his native tribal companion from Santa Fe. After spending the night at the stockade, they departed on Feb. 17 without venturing the news to its garrison that they were lost.

When the two Spaniards left to return to Santa Fe on the 17th, Pike sent word to New Mexican Governor Joaquín Alencaster that should he wish to discuss the expedition’s presence on the frontier, he would welcome a visit from the governor’s emissary. The invitation was answered on Feb. 26, when 50 mounted dragoons and 50 armed militiamen arrived at the stockade.

In the ensuing conversation with their officers, Pike was informed that Governor Alencaster had extended an offer to conduct them to the headwaters of the Red River, since they had “missed their route.” Grasping the implications of this, Pike demanded, “Is this not the Red River?” “No sir!” the Spanish commander retorted, “the Rio Grande del Norte.” Further, the governor wished for Pike and his men to accompany his soldiers to Santa Fe to explain their “business on his frontier.”

Pike and his men were taken to Santa Fe and then to the capital of Chihuahua province in Mexico and presented to Commandant General Salcedo, who was governor of the state. Salcedo housed Pike with Juan Pedro Walker, a cartographer who also acted as an interpreter. Walker transcribed and translated Pike's confiscated documents, including his journal. Mexican authorities feared the spread of both democracy and Protestant Christian sects that might undermine their rule.

During this time, Pike had access to various maps of the southwest and learned about Mexico's discontent with Spanish rule. Spain filed official protests with the United States about Pike's expedition, but since the nations were not at war and Spain was rebelling against Napoleon's brother, who was fighting England in the Peninsular War, Salcedo released the military men. The Spanish escorted Pike and most of his men north, releasing them at the Louisiana border on July 1, 1807. However, some of Pike's soldiers may have been held for years in Mexico.