Sylvie Caton (35) waits for the offense to align. Lilly Lavier (00) shifts into position. Alamosa defeated Monte Vista on Tusday night and will move on to face Pagosa Springs on Feb. 23 (Courier photo by Stephen Jiron)

SAN LUIS VALLEY — With basketball teams from the valley participating in three different classes, things can get a little complicated. In the 3A class, winner of Alamosa and Monte Vista in the quarterfinals game would move on the face Pagosa Springs at the neutral site of Alamosa High School.

During the regular season Alamosa swept the league games by scores of 55-18 and 75-25. With what was at stake, the Moose looked to pick up right where the regular season left off.  Nine points from Sylvie Caton, helped Alamosa open up with an 18-7 advantage to start the first quarter. Caton would lead the Moose in scoring with 19 points at the end of the game.

Monte Vista’s Taylor Chacon led her team in the second quarter with five points, and would lead the Pirates in the game with 12. At the half Alamosa still commanded the game by a score of 28-12. Lilly Lavier came up big in the third with seven points as the Moose continued to widen the gap. Lavier was second in scoring for the Moose and would end her day with thirteen points.

The Moose would coast to the games 54-28 conclusion. Alamosa will have a couple days to prepare for the arrival of the second seeded Pagosa Springs Pirates on Feb. 23 at 7:30 p.m. On the other side of the bracket Centauri will head north for their semifinal showdown with Bayfield in the ‘early’ game at 6 p.m.
Also 3A the Alamosa boy’s first round bye is over and the number one seed will play Montezuma-Cortez Feb. 22 at 6 p.m. The Cortez Panthers are fresh off their win over Centauri 63-60 on Tuesday night. Monte Vista utilized a 35-point second half to complete the upset of Pagosa Springs earning their way to the semifinals in Alamosa against second seeded Bayfield Feb. 22 at 7:30 p.m.

The District tournaments in 1A still have some shaking out to do, but quarterfinal games are still getting underway. In Blanca the boys from Sierra Grande played host to the Centennial Rams. Centennial cleared the play-in games with a victory over Antonito 57-53. But on Tuesday night the Rams could not keep pace with Sierra Grande. 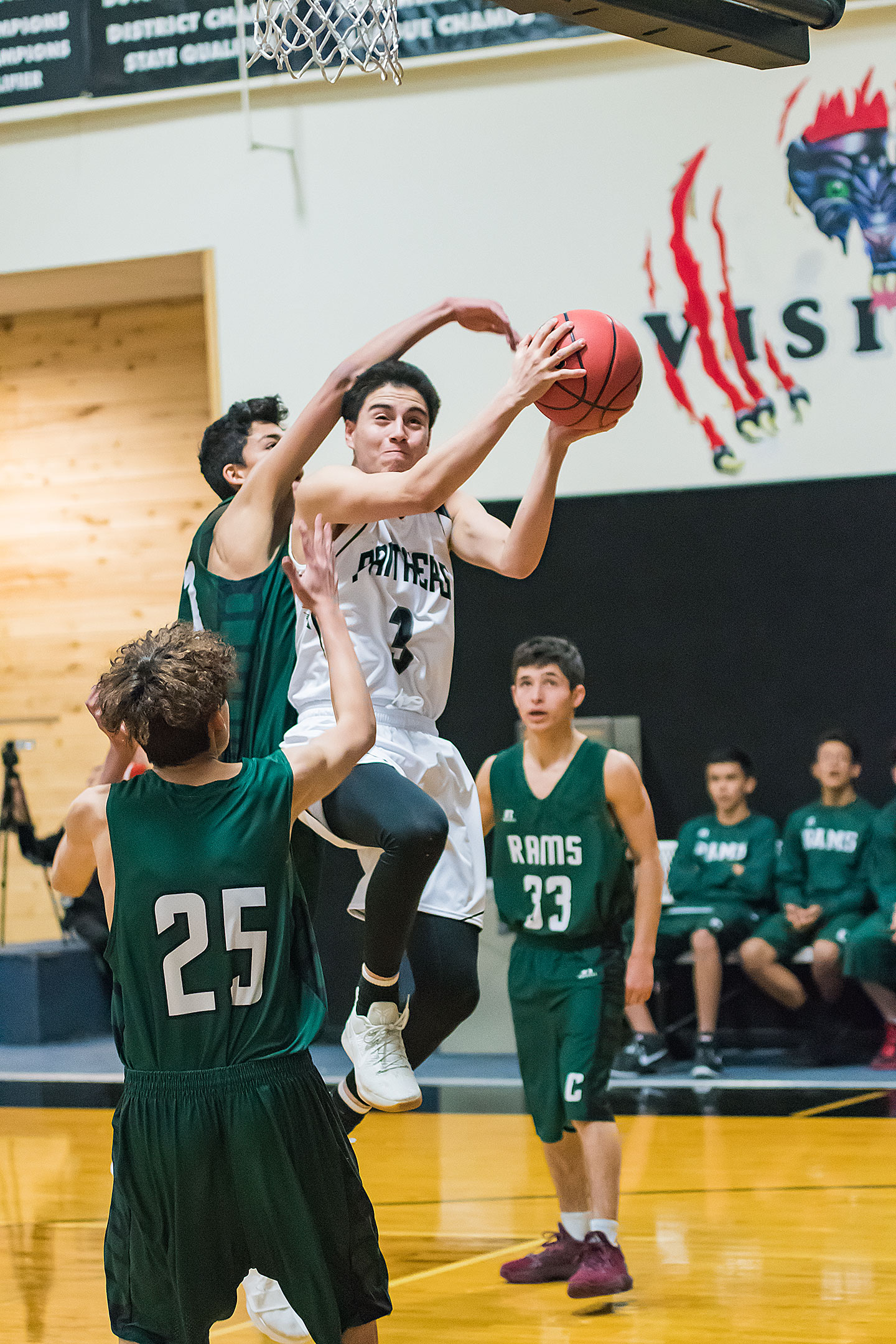 Arthur Rodriguez (3) drives through an arm to the back of the head for Sierra Grande. Rodriguez kept up the double digit averages he has been posting all season with a team leading 27 points. (Photo courtesy of Aaron Parrill)

The Panthers took immediate control with a 21-10 first quarter charged by a team effort. The trio of Arthur Rodriguez, Caleb Scharsch and Raul Minchaca combined for 17 points with two 3-pointers in the bunch. Rodriguez took the scoring title for the night with 27 points for Sierra Grande. Emilo DeHerrera would come alive for Centennial in the final stanza amassing 12 of the Ram’s 14 fourth quarter points, alas it was not enough as Centennial still fell 72-42.

DeHerrera led the Rams for the night with 19 points collecting nine of those off three pointers.
Elswhere in 1A Sangre de Cristo was also hosting a quarterfinal game. The Thunderbirds would barely escape a meeting with Cotopaxi’s Pirates in a 52-50 affair. After a tied first quarter, the T-Birds would fall behind to Cotopaxi 24-23. With four field goals, Cole Christensen led Sangre de Cristo getting 17 points. Christensen would cash in on all eight of his penalty shots for a 100 percent clip from the charity stripe. The Thunderbirds would tie things up at 40 a piece going into the final act setting things up for a fight to the finish.

Sangre de Cristo would cash in on 4-of-5 free throws while Mario Enriquez and Christensen would add three field goals to put the Birds ahead by a nose. With the wins Sierra Grande and Sangre de Cristo are set for a showdown in Plachy Hall Feb. 23 at 5 p.m. Also advancing in the boys bracket was Creede. The Miners bludgeoned Moffat 93-50 to advance to the quarterfinals. 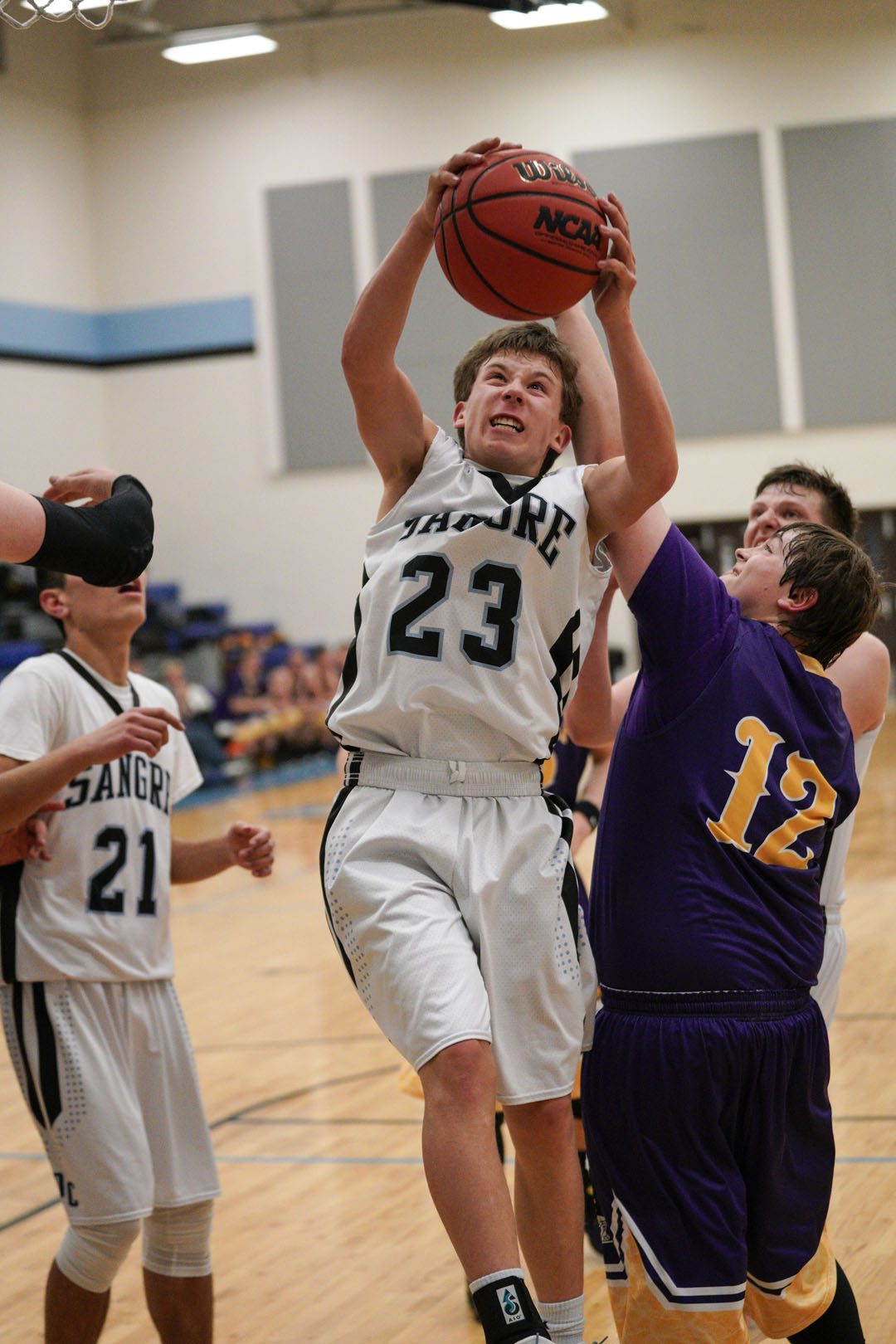 The Antonito girls advanced from the quarterfinals and will await a winner from tonight’s 5 p.m. game in Blanca between Sierra Grande and Creede. The resulting matchup will be slated for a 6:30 p.m. start at Adams State University Feb. 23. Also advancing from within the girls bracket were the Sangre de Cristo Thunderbirds. The depleted Thunderbirds went big over Centennial with a 66-17 win to move on.

They will travel to Monte Vista for the semi’s on Feb. 22 and will be tasked with facing the number one seeded Del Norte Tigers at 5 p.m. The Vikings will need to emulate their performance on Jan. 19 where they hung with the Tigers to a 60-56 Del Norte victory, obviously looking to change the ending.

The Tigers earned their ticket by snuffing out the Bobcats of Custer County in a 75-43 affair. Sanford also ran roughshod over their opponent Creede-Victor 63-18 to set an 8 p.m. date on the 22nd.

In the girls bracket at 2A Del Norte will splash into the semifinals on Feb. 22 after absolutely wrecking shop on Crested Butte 52-4. Scheduling for all three classes can be found in the Courier Sport Bulletin or at CHSAAnow check both to stay abreast on who from the valley will be advancing to regional basketball tournaments.