NASHVILLE, Tenn. — Fiddling flows in Merna Lewis’ blood. For the 35-year-old it just made sense to pick the same instrument that has been used by her aunt and grandmother in their large musical family. Recently, that choice led Lewis to play at the prestigious Grand Ole Opry House.

“It was such a cool, unbelievable experience,” said Lewis.

The daughter of Dwight and Bobbie Heersink, Lewis grew up in Monte Vista enveloped by the sounds of bluegrass and country at an early age. Aunts, uncles, parents and siblings would gather together every Sunday and jam on violins, also known as fiddles, guitars, mandolins, autoharps, pianos and basses in the Bowen String Band. Her grandmother Marie Bond Riggenbach went to The Juilliard School and taught at Adams State College, but Lewis’ main inspiration was her aunt Bettie Freel.

“From when I was walking and talking I would ask Aunt Bettie to let me play the fiddle,” Lewis said. “She put it under my chin and let me pull the bow across the strings for a minute and when I was 7 started to give me lessons.”

As a child Lewis competed in fiddle contests across the country and she eventually joined the family band in a more official capacity when Freel passed away due to breast cancer. After graduating from Monte Vista High School Lewis received an associate degree in commercial music from South Plains Community College in Levelland, Texas in 2002.

Her love of country music took her to Nashville, Tennessee in 2003. When she was briefly living in Dallas, Texas she watched a Garth Brooks concert on television with a stirring performance by his fiddle player Jimmy Mattingly.

“I saw him having a good time, running from one end of the stage to the other and it just looked so much fun and I said to myself I want to do that someday,” said Lewis. “I’m not one to sit there or stand. I have to move.”

That desire to be an active fiddler partly led to her adopting “The Barefoot Fiddler” as her stage name and social media handle.

“When I was in Texas I was playing at a club in Amarillo during college and I was wearing these god awful heel shoes. They were just so uncomfortable. So I took them off and played barefoot.”

After an audience member complimented her feet, the wardrobe choice stuck.

Known as a “side-man,” Lewis has become a famous staple playing alongside various bands in Nashville’s Broadway district of honky-tonk bars. She’s played with Trent Willmon on “Emeril Live,” LeAnn Rimes during a Dallas Cowboys halftime show, and can most recently be seen with Sarah Lawton and Brent Browning at Tootsie’s Orchid Lounge.

“I didn’t really have a band set up to play here,” said Lewis. “I kind of just moved, networked...and my name just kind of snowballed. Everybody just got to know who I was and wanted me to play with them.”

Her connections with the Nashville network prompted a phone call from Jim Brown, a former colleague, asking her to perform with him at Grand Ole Opry House on Oct. 19, pictured above. Instead of a regular weekly Opry concert, however, it was a special tribute show to the late Ralph Stanley. Over a hundred bluegrass and country acts played into the early morning hours and the sheer number of musicians cut their performance from two songs to one.

“I get butterflies every once in awhile, especially on big stages, and once I got out there and started playing the nerves went away. When we were done I was like ‘Aw man I want to play more!’”

Having only toured the legendary venue and been in the audience once before, the awe-inspiring experience was surreal and humbling for Lewis.

“To be a part of a show and standing backstage and waiting for our names to be called, I guess you could say I felt kind of important, like I’ve kind of made it in a way.” 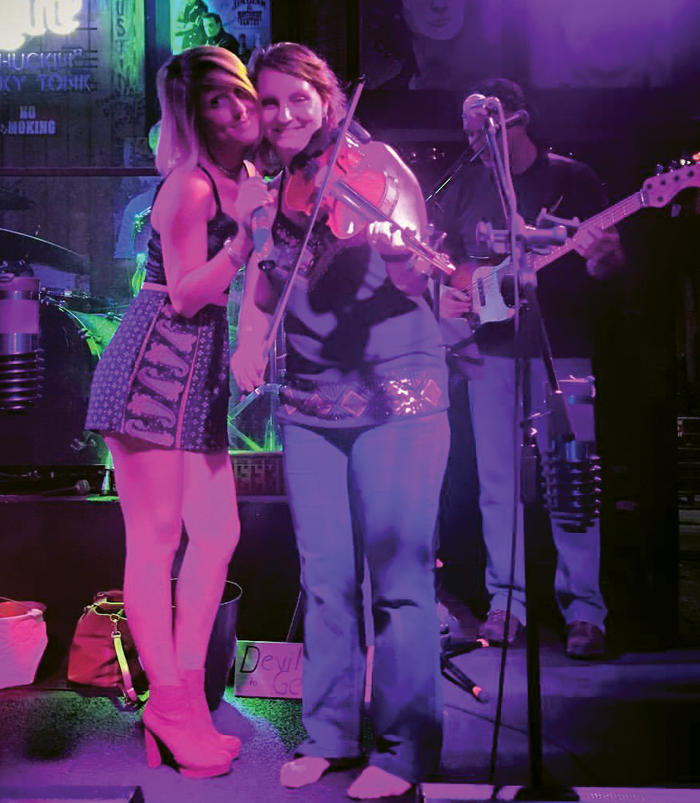 Though she played on a stage few have the chance to do so, life hasn’t greatly changed for Lewis. She has settled down with her husband Philip, a retired musician, and the pair focus on their day jobs of reselling items on eBay and distributing for Amway. Aside from a Christmas album in the works Lewis is keeping things simple and is content with not making it big.

“I’ve seen the road that a lot of musicians go down and there’s no retirement program or safety net,” said Lewis. We’re not keeping all of our eggs in one basket. Playing music is something I want to do for fun. I don’t really want it to be a job.”

If the right opportunity presented itself, however, Lewis wouldn’t turn it down.

“If Garth Brooks called me today and told me he needed me to play on his show tomorrow, I would do it.”