Moose gets back on track against Monte Vista

Ian Jackson works his way inside for Alamosa late in the game against Monte Vista. Jackson posted 7 points, all in the fourth quarter, to help finalize Alamosa's 55-28 win. (Courier photo by Stephen Jiron)

ALAMOSA — Tuesday night when the Pirates came to town Alamosa basketball needed a palette cleanser. Over the weekend Alamosa took an unpleasant trip to La Jara where both teams relented to the host Falcons. Monte Vista has struggled since the onset of league play. Between the two teams the girls are the only one to have earned a league win, against Montezuma-Cortez on Jan. 19.

Alamosa took advantage of the downtrodden Pirates to right their own ship and took two wins at Monte Vista’s expense. The Alamosa girls flexed some serious offensive muscle in a 75-25 game that was decided early in the second half. Alamosa’s boys also fared well taking a 55-28 decision.

Alamosa’s girls came out of the blocks with a strong pace Tuesday night. After one quarter of play the Moose had already opened up a seven-point lead. Sylvie Caton scored 12 points in the second quarter hitting two of her three treys on back-to-back possessions. Caton led an especially virulent offensive attack scoring 25 points and getting 4 assists. Caton’s scoring set a new personal best for herself as a Moose. 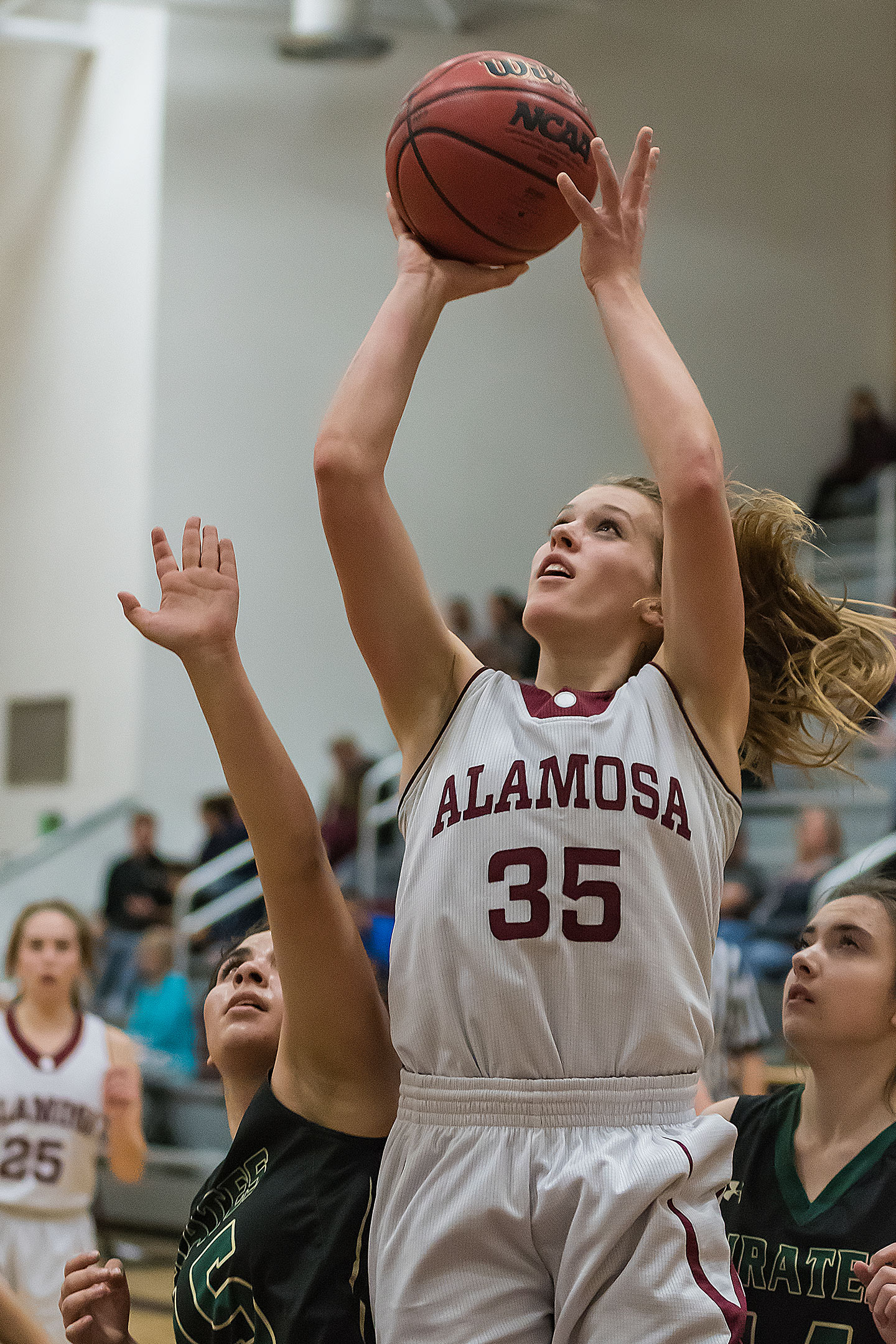 By the half Alamosa led 43-13 and teetered a mere five points away from a running clock. Monte Vista did not answer the wake-up call scoring just one basket in the third quarter. Tayler Chacon’s bucket in the third got Monte Vista on the board and helped her to lead the Pirates with 14 points.
Alamosa’s bench would close the game as it reached its finale.

Monte Vista’s boys would take the lead 7-6 in the early going as both clubs struggled to get anything to drop. The end of the first would yield a 14-8 score as Alamosa came on first to pull away. Monte Vista’s second quarter would bury themselves, they would only muster one basket. Darrius Garcia would add 12 point’s to Monte Vista’s total and lead the Pirates for the night.

By the half Monte Vista had a 21-point deficit to contend with. The Pirates responded by having their most productive quarter of the night while keeping Alamosa to their least productive. The Mean Moose would lose Angelo Ramirez to what was called a rolled ankle as the third quarter expired.

The rest of Alamosa’s starters would take extended leave on the bench in the fourth quarter. This allowed the deeper parts of thee roster to close finalize the game.

Alamosa hands No. 6 Centauri their first loss of the season

Sanford too much for Center

Tigers fend off Panthers to close the Fieldhouse