MONTE VISTA — Friday night Monte Vista welcomed Sanford to town for interclass play. Monte Vista resides in the Intermountain League in 3A while Sanford is from District 1 of 2A. The Pirates claimed victory in both the boys and girls games.

Don’t let Sanford’s classification fool, the Indians are quite capable of punching above their weight class. The Sanford girls made regionals last year while the boys fell at state to the eventual champions.

Monte Vista’s girls have accomplishments of their own having made state last year as well. Monte Vista’s boys attended the district finals last year where they fell to Pagosa Springs. Most recently both schools attended the La Junta Shootout. The Sanford boys and girls both got the better of Monte Vista that weekend taking second and fifth in their respective tournaments.

Just a week removed it’s a safe bet that Monte Vista hadn’t let anything go. The girls game started pretty slowly with both teams combining for 14 points in the first quarter. Sanford took control in the second quarter slipping out to a 10-19 lead at the half. Coming back from the break the Pirates woke up and utilized a 10-2 run to bring the game within one. The lone two points from Sanford was their only basket of the third quarter. 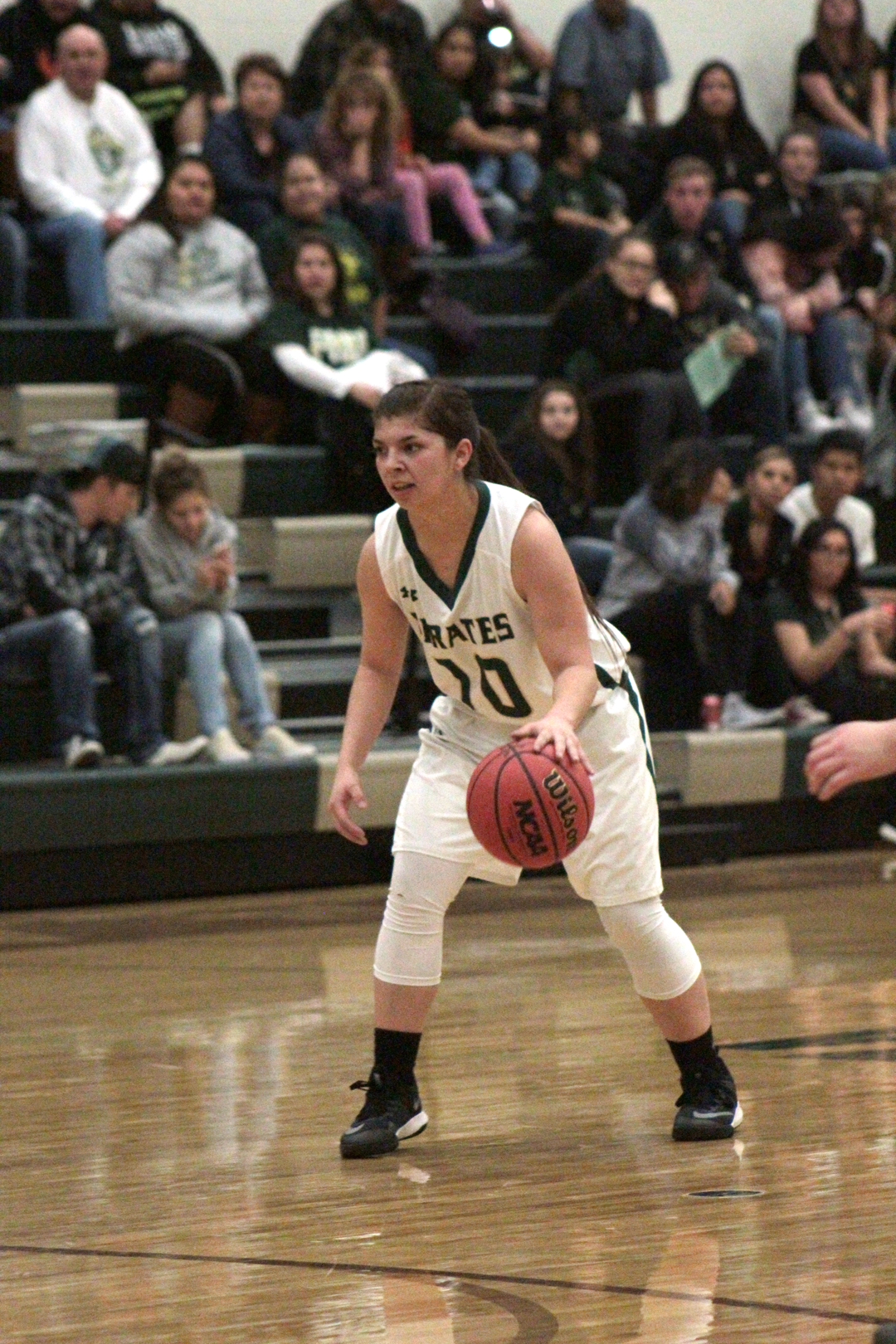 Mariah Barbosa waits at the top of the key. Barbosa contributed 22 points to the Pirates' 39-31 victory on Friday night. (Courier photos by Stephen Jiron)

Three minutes later Mariah Barbosa buried the go ahead three-pointer for a 25-23 game with a minute and a half in the third.  Barbosa would contribute 7 more points from the charity stripe in the fourth quarter to lift Monte Vista above Sanford for a 39-31 final.

Barbosa led the Pirates with 22 points hitting two three pointers.  It was Nykia Ruyala for Sanford with 14 points.

The boys played a tight game similar to the matchup they had in tournament play just the week before where Sanford found the edge in a two-point victory. At the half it was 25-24 Sanford’s favor. A productive 3rd quarter from both teams showed Sanford outpacing Monte Vista to a 40-37 score.

That was when Monte Vista clamped down on the Sanford offense.  Monte Vista’s David Mascarenas hit the equalizer with 7 minutes to play in the third from there Monte Vista didn’t look back. The Pirates opened up a five-point lead and protected it to the end of regulation. Sanford would only score 5 points in the final stanza.

Monte Vista's Darrius Garcia came up big in the fourth hitting all six of his free throws and was a perfect eight for eight on the game. Mascarenas led the Pirates with 18 points getting 5 of those on three trips to the free throw line. Zach Sittler and Maguire Peterson each broke double digits for Sanford with 21 combined points.

Monte Vista will begin their holiday break and will be back in January.  The Pirates will host Bayfield on Jan. 13th while Sanford is back in action Dec. 21 when they welcome another 3A opponent in Centauri.