MOSCA — Most runners don't run more than a handful of marathons a year. Bill Sycalik has run 43 since last June—all at national parks—and he's still going.

His latest run at Great Sand Dunes National Park and Preserve clocked in at six hours and eight minutes. He now has just 419.2 miles and 16 parks to go until he reaches his goal of running 26.2 miles at all 59 parks.

Sycalik, 45, is doing this in part to celebrate the 100th anniversary of the national parks. He left his job as a management consultant in New York City last summer to get out of the corporate life and get closer to nature.

Though the experienced athlete has ran in the Boston Marathon, the New York City Half Marathon and the Cayuga Trails 50 mile ultra marathon, Sycalik didn't start running until he was 33. To help get into shape he signed up for the Detroit Marathon as his first race.

"If Oprah could do it and if George W. Bush could do it, I could certainly do it," Sycalik said. "From that point on I kept running."

None of national park marathons are organized commercial races. Rather they're more personal joy-runs. He meets with the rangers ahead of time to plan out a route that stays on designated trails and sees as much of the park as possible. Depending on terrain, elevation and weather, the runs average between five and seven hours.

He enjoys the solitude of going beyond the populated areas but Sycalik also runs with others. He reaches out to local running groups and encourages interested people to contact him on his site, www.runningtheparks.com, or through social media.

Of the 43 national parks, Sycalik has had other participants for 15 of them. For 10 of those, he has had at least one person run alongside him the entire marathon. Aside from the coordinated groups, there have been times he hasn't encountered another person once leaving the parking lot.

Some parks have required a bit of creativity in order to do all 26.2 miles. For Dry Tortugas National Park, which is little more than a fort off the coast of Florida, Sycalik ran around the .6 of a mile perimeter 44 times. At Voyageurs National Park in Minnesota the planned trail was underwater due to beaver activity so rangers helped him find an alternate route. When he arrived at the ferry to head to Channel Islands National Park in California he discovered it didn't run regularly as he would have liked.

"It's California," Sycalik said. "It's 72 and sunny every day. There is no off-season!"

He ended up completing another park in California before returning to the islands.

However, the challenge is going smoothly if route changes are all he has to worry about. So far Sycalik has only two minor falls and hasn't gotten caught in bad weather due to his flexible schedule.

Before this adventure Sycalik had only been to three national parks and said that this has been an eye opening experience.

"I had the stereotypical notion that a national park was a mountainous place," he said, "but they're not all like that at all. It's been very, very different and exciting to learn about."

His first marathon in a Colorado park was at Rocky Mountain National Park on May 17, the day before the recent major snowstorm. Even then some of the routes were covered in snow.

Last Thursday, when he ran at the dunes, the weather was more favorable. He started at 7 a.m. to beat the heat, and clouds shielded him from the sun. While high spring winds were less than ideal, it wasn't as difficult to deal with as the sandy trail.

He began the marathon at the visitor's center and ran to the entrance sign and back to minimize his time on the sand. He followed the Medano Pass Primitive Road and merged onto the Sand Ramp Trail.

"That is one of the hardest efforts for the distance that I've covered that I've run on this trip," Sycalik said. "It was just really squishy, soft sand. It was sucky." He looped back on the primitive road, which was more packed down, to the campground. Because he was short on distance he did the visitor's center portion again and went to the Wellington Ditch Trail and back.

As a rule Sycalik stays on the trails and stays inside the park, instead of venturing into the preserve. That means he couldn't run up the Mosca Pass Trail or the entire primitive road.

He originally planned to run on Sand Ramp Trail a few more miles to where it meets Sand Creek on the north side of the dunes but he decided it would have been ill advised. 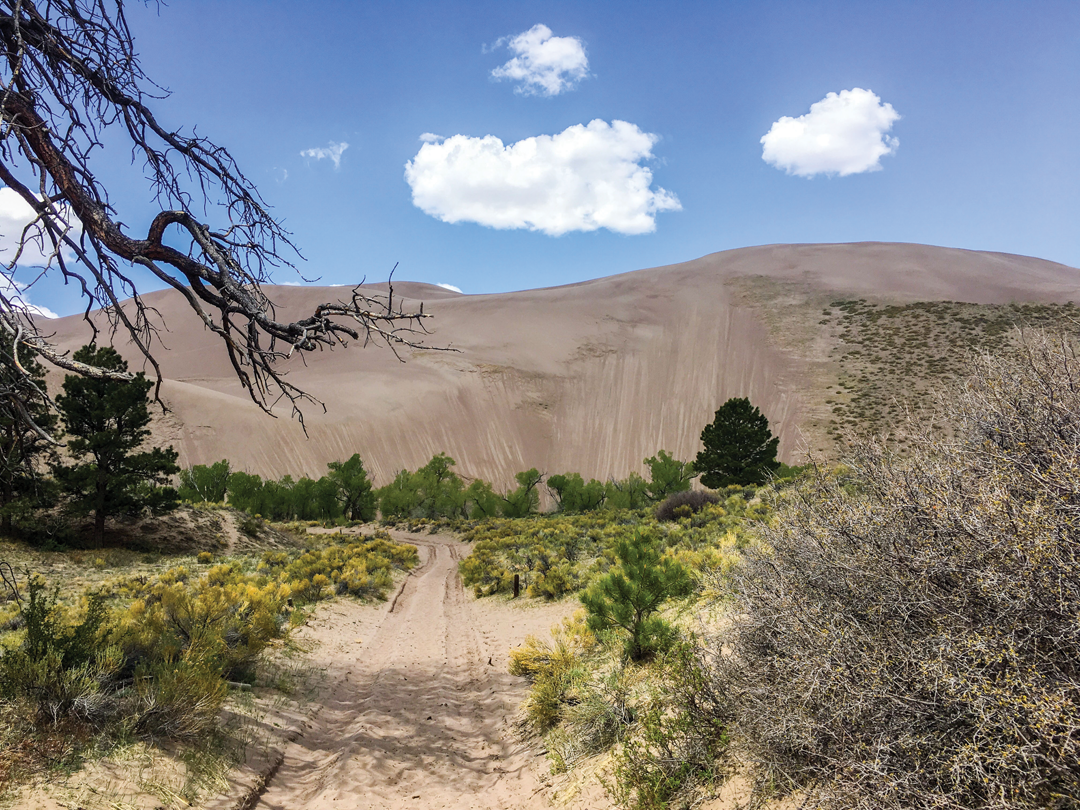 Yet he was still happy with the experience. "Because I cover so much distance, I get to see so much. The way the dunes don't sort of glide down—they just drop—is pretty cool."

Sycalik will return to Colorado in roughly five weeks for his last marathon in the lower 48 states at Black Canyon of the Gunnison National Park. Afterwards he'll head to Hawaii and American Samoa.

The parks in Alaska will have to wait until next summer because it'll be too late in the season by the time he makes it out there. If Sycalik can fine-tune the logistics he'd like to do all eight in eight days with an outdoor company filming the expedition.

Not content to merely run and photograph the parks, Sycalik started writing haikus about each place he's visited in March. Coming from a more business-oriented world, he sees it as a way to exercise his creative writing skills.

"It's hard!" he said. "Coming up with them takes awhile so that's why there's a bunch of parks missing. I was working on Rocky Mountain, but I can't get it just right. It may be years before I finish."

Sycalik would like to move to the greater Denver area when done with all 59 parks. Once there, he'd like to work as a product manager for outdoor gear companies to improve goods like clothing, footwear, vegan nutrition and other items.

He is also considering becoming a public speaker to give talks based on the marathon project. He would motivate people to realize that their dreams are more possible than they think they are.

"People are so caught up in the idea that they can't leave their job for less than a week," said Sycalik. "If you're always going to be that scared and that uptight about everything, then you're missing out. It doesn't have to be extreme like running in the national parks, but if you want to take your kids and sail around the world for a year, you can do that.

"It's not what you can do, it's what you actually do that defines you. So figure it out, it's possible."

Sycalik is scheduled to run at Mesa Verde National Park tomorrow. People can follow him along on @runtheparks on Twitter, @runningtheparks on Instagram and at www.runningtheparks.com. Photos courtesy of Bill Sycalik.