SAN LUIS — Another battle seems to have been won, but the war rages on.

The owner of Cielo Vista Ranch, long called “La Sierra” or “the Taylor Ranch” has reportedly agreed to some stipulations outlined in a letter from attorney Aaron Boschee regarding a form letter sent to some persons holding rights to use the land.

Not every one of the rights holders received letters, and Attorney Ronald Fano, representing ranch owner William Harrison, did not explain why. In his form letter, Harrison also offered to buy land rights for $300 each.

More than 100 persons, many of whom have fought for more than 40 years to regain rights to lands once granted by treaty to their forefathers, crowded a church hall at San Luis on Monday to hear more about the situation and have questions answered by Land Rights Council (LRC) Chair Shirley Romero-Otero and attorney Jerome DeHerrera, a member of the legal team.

All of the attorneys have worked pro bono, essentially for free, since the original lawsuit was filed in 1981.

Part of a land grant dating to the 1800s, the ranch has been owned by New Bern, N.C. lumber baron Jack T. Taylor, Enron executive Lou Pai and a group of Texas investors who named it Cielo Vista. The latter group sold the ranch to Harrison for an estimated $105 million.

‘A place to play’

According to Romero-Otero, Harrison recently told a group of LRC representatives and attorneys that he bought the land because “I need a place to play.”

She responded that children of rights holders need to be allowed to go onto the ranch, camp there and reconnect with the land.

Romero-Otero said Harrison appeared to be “young and naïve,” but that impression changed as time passed.

He inherited great wealth at age 17, but couldn’t claim it until he was 30 — in 2017 — and, in response to questions about his knowledge of the ranch, said he had read a book about the ranch and litigation, a book characterized by LRC as being very “biased” against Romero-Otero and other plaintiffs in the long-running suit.

Management plans are being worked out by the LRC regarding gathering wood and grazing. These will be presented to Harrison.

“We need the management plans to be environmentally friendly.”

Romero-Otero said the management plans will be the bulk of LRC work for the next 24 months and “LRC can’t do it alone — help, volunteer, do what you can.”

Romero-Otero said the high courts have determined, “Our rights trump their rights.”

“Our children need to know this.”

At the beginning of the meeting, Pete Espinoza, one of the original plaintiffs, said most of the people involved are aging and the youth need to become involved.

In a harshly worded letter dated Jan. 10, Boschee addressed a Jan. 3 letter of explanation written by Fano. “Unfortunately, your explanation does not satisfy my concerns about the communication and its impact on my clients.”

He charges that Fano “improperly allowed Harrison to sign what is plainly a legal communication” in violation of Rule 4.2 of the Colorado Rules of Professional Conduct regarding communication about the subject of the ranch rights with persons known to be represented by an attorney.

“Despite this, you permitted your client to sign what is plainly a legal communication: The offer characterizes my clients’ legal rights, makes an offer of settlement for those legal rights, describes the process by which my clients might accept the settlement offer and concerns the exact subject matter of my representation in a 30-year running lawsuit.”

“You cannot evade the rule by merely placing the improper communication on your client’s letterhead… Nor does the fact that Mr. Harrison’s Texas lawyer drafted the letter remedy the violation.”

Marshall White, a Texas-based attorney, was listed as contact person for those submitting transfer documents. Fano suggested he was acting as a “landman,” not an attorney.

He has been instructed to take no more calls. A “non-lawyer administrative assistant” will take the calls.

Fano claimed the offer was an attempt by Harrison to see if people with rights they weren’t using might want to sell them.

DeHerrera advised the rights holders to ignore the first letters and “If anyone gets some documents, you must not answer them… Nothing is effective until the letter is sent to class action counsel.”

“He has a right to make an offer, even if it’s a ridiculous offer, but nothing is effective.”

The Boschee letter says the purpose of the Colorado rule is “to ensure that a party or an attorney does not overreach or exploit another party who is represented and who may not have a formal education or legal awareness to understand the legal consequences at stake.”

The offer made by Harrison falsely states that there are no records to indicate whether rights-holders have made use of their rights and that the ranch owner has no way of knowing if a rights holder intends to use such rights.

Boschee wrote that, “after three decades of litigation that is currently pending on appeal, just such a process exists.”

DeHerrera said each rights-holder would soon receive a form asking what rights they plan to exercise. They have the right to gather firewood for household use, the right to take timber for construction/ maintenance of a house/farm buildings and the right to graze a reasonable number of livestock for domestic purposes and they will be asked to indicate their plans on the form.

They aren’t required to use their rights. A court-approved process exists protecting rights holders who choose not to exercise their rights without prejudice to exercising those rights at a later date.

Boschee points out that Harrison’s offer “also misleadingly suggests that its purpose is to preserve the resources of the ranch. There is no indication that such resources are in jeopardy or that any rights-holder’s exercise of their rights would threaten the ranch’s resources.”

The offer thus falsely implies that, if a rights-holder exercised the rights, they could imperil the property’s resources to “the detriment of others.”

If a property with an easement is sold, DeHerrera said the rights are gone forever and the new owner will have no easement. 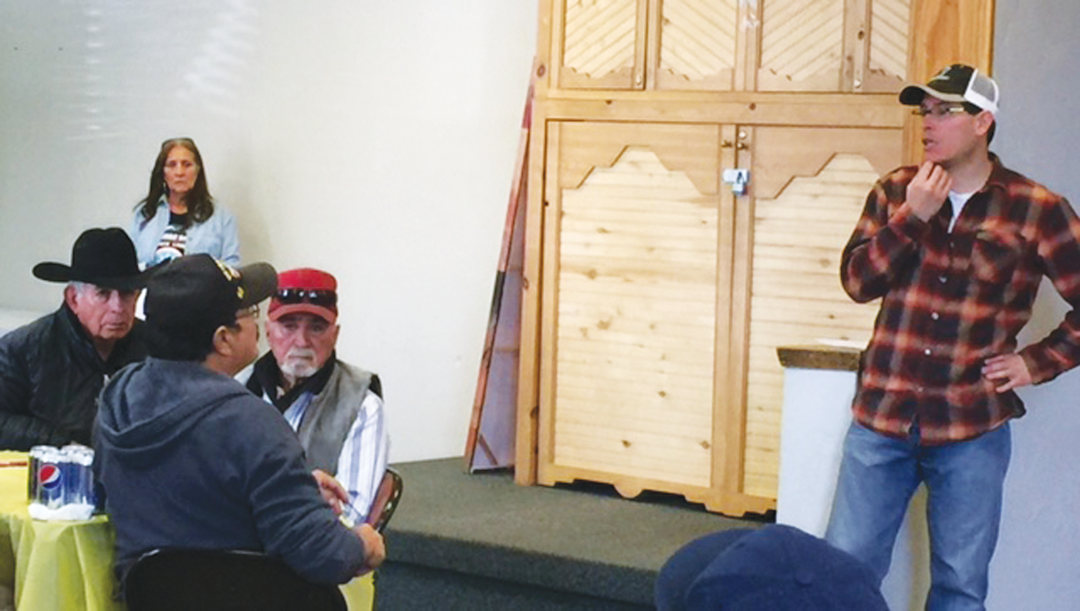 Romero-Otero said some 1,000 persons have keys and some have several parcels of land. An estimated 3,000 parcels have access rights and there’s a key for every parcel.

Attorneys for the rights holders have demanded that Harrison send a corrective letter “vetted and approved by us,” explaining that he made the offer without approval of plaintiffs’ counsel or the court; clarifying that rights holders should contact the plaintiffs’ counsel to assist them if they have questions or are considering the offer; and advising rights-holders that Harrison and his company will not record or otherwise seek to enforce the transfer document or pay the $300 consideration until the matter has been addressed by the court.

He is also asked to provide the addresses of every person or property to whom a letter was sent and an accounting of all letters sent, replies received, money paid and releases signed.

Attorneys for Harrison are asked to provide copies of all documents received by their client from any rights-holders related to the letter and, consistent with Rule 4.2, refrain from sending any future correspondence to rights-holders without obtaining agreement from plaintiff’s counsel or court approval.

In an historic opinion, the Colorado Supreme Court in 2003 upheld the rights of plaintiff property owners —whose heirs and predecessors settled the land grant when it was still part of Mexico— in and around San Luis to exercise traditional use rights to graze livestock and collect wood and timber on the property. This decision overturned previous court and court of appeal decisions that had denied the landowners these rights.

District Judge Gaspar Perricone reopened the gates of a 77,000-acre ranch to descendants of the original San Luis Valley settlers, after decades of court battles. In a hearing lasting less than an hour, he told a packed Costilla County courtroom in no uncertain terms that the heirs to the Sangre de Cristo Mexican Land Grant had won the case.

The Supreme Court agreed with the lower courts that, because the grant was settled after the Mexican-American War, the terms of the 1848 Treaty of Guadalupe Hidalgo did not apply under Mexican law; however, the court recognized a document written by early grantor Carlos Beaubien, supported by an agreement signed by Gov. Gilpin and other evidence, guaranteed a prescriptive easement to the landowners.

Noting that Beaubien wrote the document to honor his commitment to settlers he had persuaded to move hundreds of miles to make homes in a wilderness, the court declared: “It would be the height of arrogance and nothing but a legal fiction for us to claim that we can interpret this document without putting it in its historical context.”

Those court decisions are currently being appealed and DeHerrera said the legal team has what he considers a strong case. Boschee was working on appeals briefs even as the meeting was held in San Luis.