By: Ruth Heide - Updated: 4 years ago

ALAMOSA — Cyclists got an early start from Alamosa on Sunday as they began the 447-mile Ride The Rockies tour, which kicked off in Alamosa and will conclude this weekend in Salida.

Most of the bicyclists headed out long before the 7 a.m. opening ceremonies on Sunday, June 11, with early risers hitting the road by 5:30 a.m. However, a portion of the 2,000 Ride the Rockies participants as well as several local residents attended the opening ceremonies, which included opening remarks from Alamosa Mayor Josef Lucero and several sponsors, a blessing of the bicycles and cyclists, a bicycle give-away, a $5,000 gift to the local PALS program and a train whistle send off.

Mayor Lucero wished the cyclists safe traveling and invited them back to visit the local sites “in the highest alpine valley in the nation.” 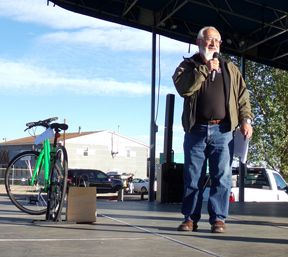 Alamosa Mayor Josef Lucero gives opening remarks at the kick-off of The 2017 Denver Post Ride The Rockies Bicycle Tour Sunday morning. Photo, along with the one above, by Ruth Heide.

The mayor also thanked The Denver Post Ride The Rockies tour for choosing Alamosa to host the 32nd tour and for the economic development this event brings to small communities like Alamosa. “I thought I was in Denver,” he joked when he went to eat at one of the restaurants downtown Saturday night and was told the wait would be an hour or more.

“Our businesses truly benefit from the economic impact that this type of event has,” Lucero said. “We really appreciate it as a small community. On behalf of the City of Alamosa, we appreciate you being here. Be safe on the road.”

Cyclists came into Alamosa late last week and throughout Saturday, with special entertainment and other events welcoming them to town. They began the first leg of their cycling tour on Sunday morning, with Pagosa Springs hosting the cyclists Sunday night and Durango Monday night. The tour will continue to Ridgway, Montrose, Gunnison and Salida. 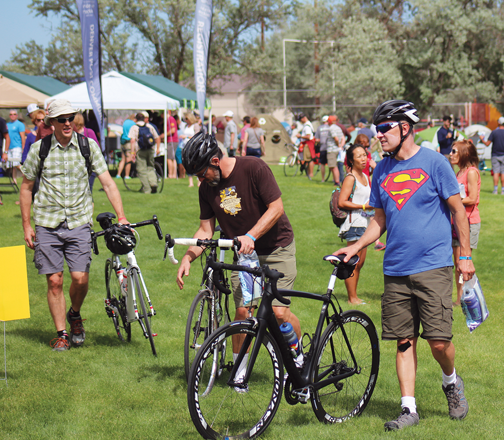 Ride The Rockies cyclists get a feel for Alamosa on Saturday before departing on their 447-mile tour. Photo by Jeremy Alonzo.

“We are happy to be starting off a week of riding in your wonderful community,” she said.
Wheelock said of the 2,000 riders in this year’s tour, 603 are first-time participants. She said the youngest participant is 10 years old and the oldest 82. The participants represent nine countries and 49 states, with West Virginia being the only state not represented. 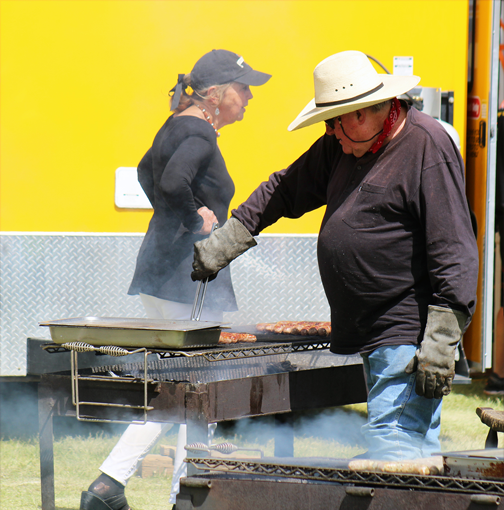 Greg Gosar cooks up some Gosar sausage with wife Suzanne on site to help. Gosar sausage was one of the local fares offered to visiting cyclists with Ride The Rockies. Alamosa greeted the riders with good food and entertainment on Saturday, the day before the ride began. Photo by Jeremy Alonzo.

“This event is remarkable,” Wheelock said. “You are going to have a fantastic experience.”

She thanked all those who made this event possible including staff and the 76 volunteers who are on the route managing traffic and aid stations as well as many other duties. Wheelock also thanked Ride The Rockies sponsors.

Cyclists heard from several of the sponsors including a Zerohero spokesman who encouraged riders to recycle through the Green Rider Initiative, which would reward one of the responsible riders with a jersey after each day’s ride, and a spokesperson for Suncor, the fuel provider for Ride The Rockies, who also encouraged riders to ride “safely and sustainability,” as well as Colorado State Patrol Sergeant Marshall Schwartz who encouraged riders to watch their descents, such as the area going down the west side of Wolf Creek Pass and to ride single file on the highway where possible.

Summit Cycle Solutions is one of the Ride The Rockies partners, set up in Alamosa to help participants prepare for the tour. Photo by Jeremy Alonzo.

“Hopefully it will be a safe ride for everybody,” he said.

Wheelock thanked local police and others who were helping to keep the cyclists safe as they rode.

One of the benefits as a host city was the presentation of a $5,000 grant award from the Denver Post Community Foundation to a local organization benefitting youth. The foundation chose the PALS (Positive Activities Lead to Success) program to receive the grant award, and PALS Director Tim Dellett accepted the donation on Sunday morning. PALS is a program operated under the direction of La Puente that serves children with a history of trauma. 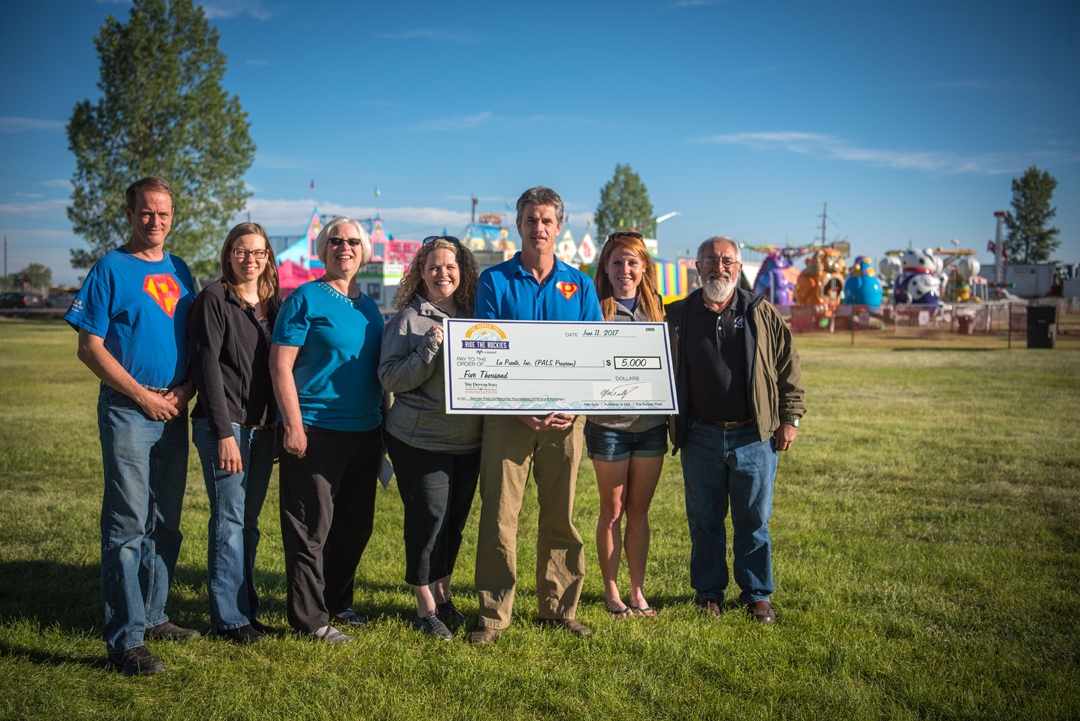 Dellett explained that PALS can serve up to 20 children ages 5-9, and the program’s primary goals are to provide safety and opportunities for participating youngsters. PALS also encourages youngsters to set goals and work towards them, much like Ride The Rockies participants are doing, Dellett explained.

Youngsters learn to work together and give back to the community in different ways, he added.

PALS operates as an after school program during the school year and all day during the summer, Dellett added.

Dellett thanked the foundation for its donation.

“You have made a very real positive impact here in the Valley and in Alamosa.”