Kyree Huffaker (12) works in behind Caroline Van Berkum's screen Friday night. The Falcons would keep Bayfield scoreless  in the second half to advance to the IML finals.

ALAMOSA — Friday night in the Alamosa High School gym, girls’ basketball teams from the Intermountain League (IML) squared off to finalize the championship brackets. Centauri ran over Bayfield to earn their pass to Saturday’s finals with a one sided 69-17 destruction. Alamosa couldn’t get past Pagosa Springs’ defense and fell to the second seeded Pirates 51-26.

The early game was Centauri and Bayfield, the last time the Falcons and Wolverines met it was a similar game that Centauri won by 39 points with Caroline Van Berkum leading with 11 points.

In Friday night’s game both teams took a little time to loosen up. Centauri caught traction first and created a 9-point gap with three minutes to play in the first. After Bayfield answered with one bucket the 'Falcon show' continued with Centauri closing the first with another unanswered run for a score of 14-2.

Centauri continued pouring it on in the second quarter with Kyree Huffaker hitting her second trey of the game. Huffaker would hit three 3-pointers on the night and lead Centauri with 13 points. The Falcons spread out their points with four different girls either scoring double digits or getting very close.

After the half Centauri came back from the locker room, a cursory glance at the stat sheet would suggest that maybe Bayfield didn’t. The Falcons would breeze through the remainder of the game with 26 points, Bayfield would not register a point in the second half. The Centauri girls don’t own the third best RPI score in 3A basketball for no reason. 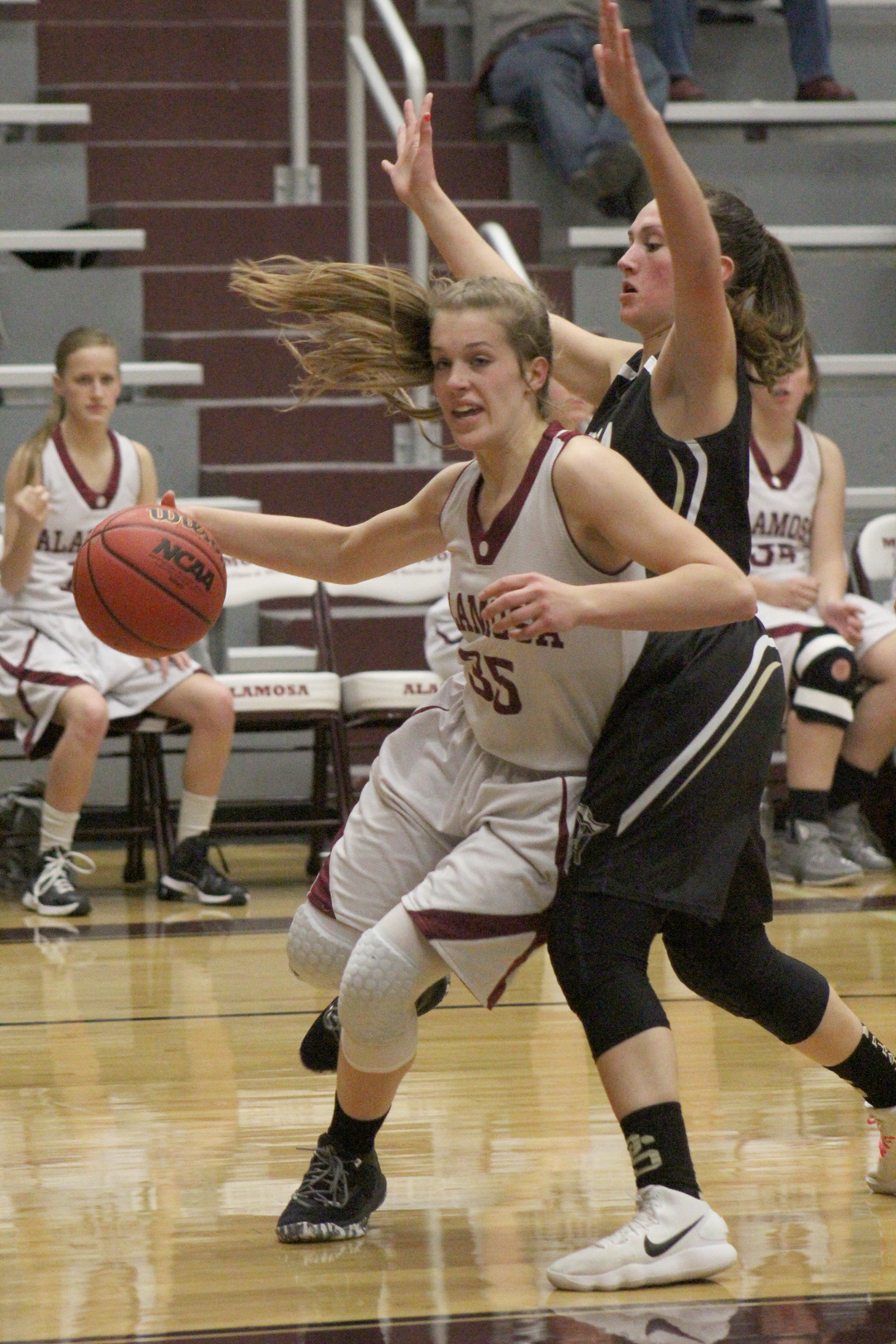 Alamosa junior Sylvie Caton (35) goes for broke attacking the paint. Caton would not allow Alamosa to be silenced producing 16 of the Moose's 26 points.(Courier photos by Stephen Jiron)

Alamosa’s girls closed the night with their game against Pagosa Springs. In their last meeting on Feb. 2 The Mean Moose were defeated 58-25. The Moose were eager but  unable to change that score Friday night. Alamosa struggled with ball control early. In six possessions the Moose were unable to get inside against Pagosa and turned it over all six times.

Even with the poor start Alamosa junior Sylvie Caton refused to allow the Moose to fade away. Caton would take Alamosa on her shoulders and carry them through the first half. The scoreboard shown nine points for Alamosa at the break, all nine belonged to Caton. Lilly Lavier would join in on the scoring in the third quarter and was followed by Alana Hackett. The Moose were punished for their sluggish start by then, trailing Pagosa’s Pirates 37-21 at the start of the fourth.

With a five-point fourth quarter Alamosa relented to Pagosa Springs. In tonight’s championship games one and two Centauri and Pagosa Springs, respectively, will play for the district title at 6 p.m. Alamosa’s girls will take on Bayfield in a 3 p.m. game for third place.