By: Staff Report - Updated: 3 years ago

ALAMOSA– In spite of only three entries this year, judges had their work cut out for them determining the winner of the fourth annual train-themed window decorating contest here this year.

Co-sponsored by the Rio Grande Scenic Railroad and the Alamosa County Chamber of Commerce, the contest resulted in Spencer Architecture taking the top prize of 15 tickets of their choosing on the railroad in 2018, with Wild Rose taking second for 10 tickets, and SLV Center for Restorative Programs (CRP) grabbing third for five tickets. RGSRR agreed to increase the total prizes to 30 tickets to generously accommodate the quality of entries.

Train and overall theme, plans for use of the winning tickets and “bribes” of the judges all came into play for the final results.

Spencer’s “train to Hogwarts” of Harry Potter fame caught the judges’ fancy as their theme followed through with train tickets from “New York to Hogwarts”, and butter beer and associated appetizers. They also chose to share their train ticket winnings with La Puente Homeless Shelter.

Thor and his “save the puppies” train was a close second at Wild Rose with owners Joyce and Terry Wiley carrying out the theme even if it wasn’t “Thorsday”. Judges were treated to “Thor blood” punch and barley brew, along with gingerbread “puppy biscuits” and a pet “labrador.” Their winning tickets will go to SLV Animal Welfare Society.

At CRP, staff proclaimed that “they support the Rio Grande Scenic Railroad” and displayed a train in their Main Street window featuring pictures of staff members and even a mystery window where wandering eyes appeared. Hot apple cider and cookies awaited the judges there, as well as some goodies to go. The tickets won there will continue to support CRP’s efforts to help young people in the SLV. 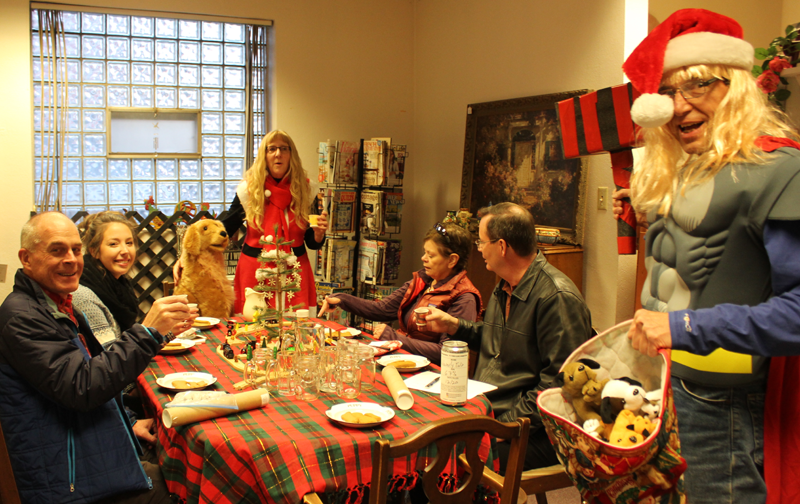 Even though it wasn’t “Thorsday”, the Alamosa window decorating contest judges were treated to a “save the puppy” train theme at Wild Rose with owners Terry “Thor”, right, and Joyce Wiley. Shown are from left, Jeff Owsley, Kyra Burke, Joyce Wiley, Debbie Sowards-Cerny, Randy Wright and “Thor” Wiley.