Ease on down to AHS for 'The Wiz'

ALAMOSA — You're not in Kansas, or Colorado, anymore. Tonight the public is invited to get swept away to Emerald City with the premiere of "The Wiz" at Alamosa High School. The 1974 musical is an African-American reimagining of L. Frank Baum's classic 1900 children's tale "The Wonderful Wizard of Oz."

Just like in the popular 1939 film, the audience can expect an introspective adventure about finding oneself as Kansan Dorothy Gale, Scarecrow, Tin Man and The Lion search for their home, brain, heart and courage.

The main cast of 15-year-old freshman Lyric Wood, 16-year-old juniors Ali Goins and Danielle Daboll and 18-year-old senior Natasha Couoh are all veterans of the stage, having performed in past AHS and Ortega Middle School productions.

"I love singing," said Goins, who plays Dorothy pictured above with Morgan Hollingsworth's Addaperle, "so when I can combine singing and acting and it put it together, I can do something that's awesome. It's amazing."

"It's just kind of like a habit now almost," Couoh, who plays The Lion, said. "There's no question of whether we're going to do it or not."

Though Couoh doesn't see herself getting into the musical profession after college, she has enjoyed her time in entertainment. Since she made the posters and programs for "The Wiz," it has given her experience in advertising, her desired major. 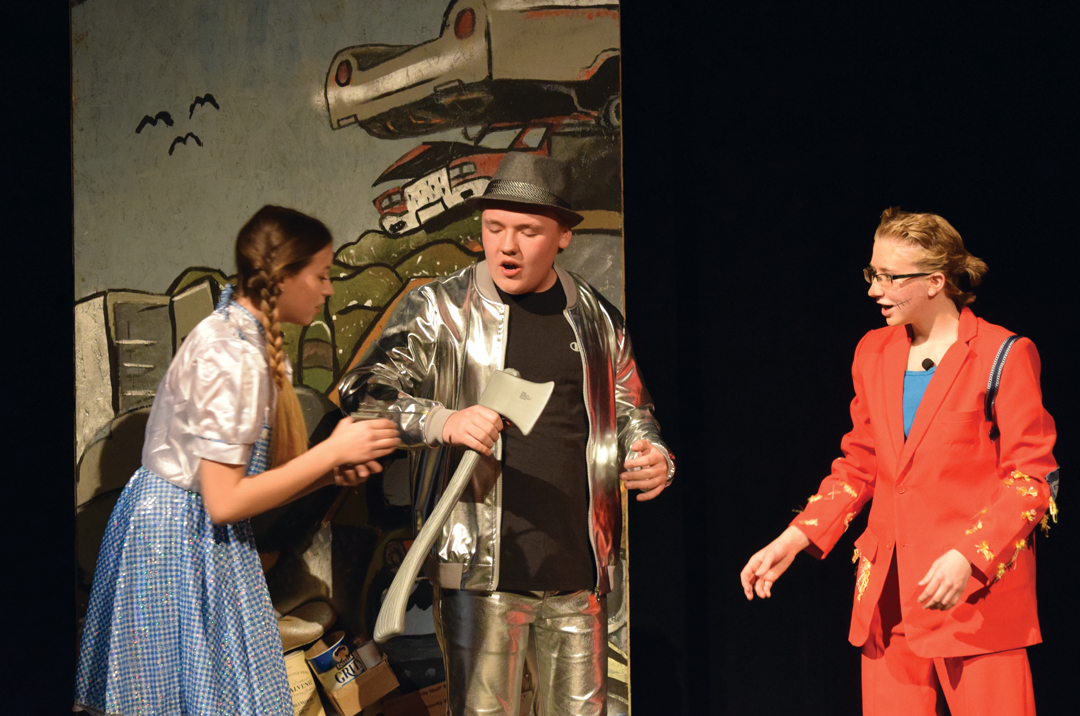 The Tin Man, center, sings "Slide Some Oil To Me" as Dorothy Gale and Scarecrow assist him in "The Wiz." The characters are played by Lyric Wood, Ali Goins and Danielle Daboll, respectively.

Along with memorizing lines, staying in character and being prepared to improvise in case something goes wrong, the students have a fair share of elaborate dance numbers to execute.

"When you're singing it's one thing but when you combine dancing into it becomes a lot more difficult," Goins said. "I think it's the most dancing we've ever had."

Fellow AHS senior Hailey Dennis choreographed all of the moves and the dancers humanize iconic aspects of the story such as the yellow brick road and tornado.

Be sure to stay until the finale to catch the cast's favorite scene and tearjerker.

"I think it's the most emotional," Goins said. "It's a beautiful moment that shows how far we've come."

Cost: $8 for adults, $5 for students. Tickets are purchased at the door or can be purchases in advance at AHS from music teacher Kim Waller and English teacher Aaron Zak.