Del Norte senior Lacie Jones goes up for one of her 10 kills in the Tigers victory over Custer County on Thursday night. Jones also registered one of Del Norte's 2 blocks.

DEL NORTE— Del Norte played host to the Custer County Bobcats and defeated them 3-1 on Thursday night in a league game.

Custer County is doing well this year going 6-4 in league play good enough to earn a first place spot in the West Central league. Del Norte currently holds the number three spot in their league and are winners of six of their last seven. 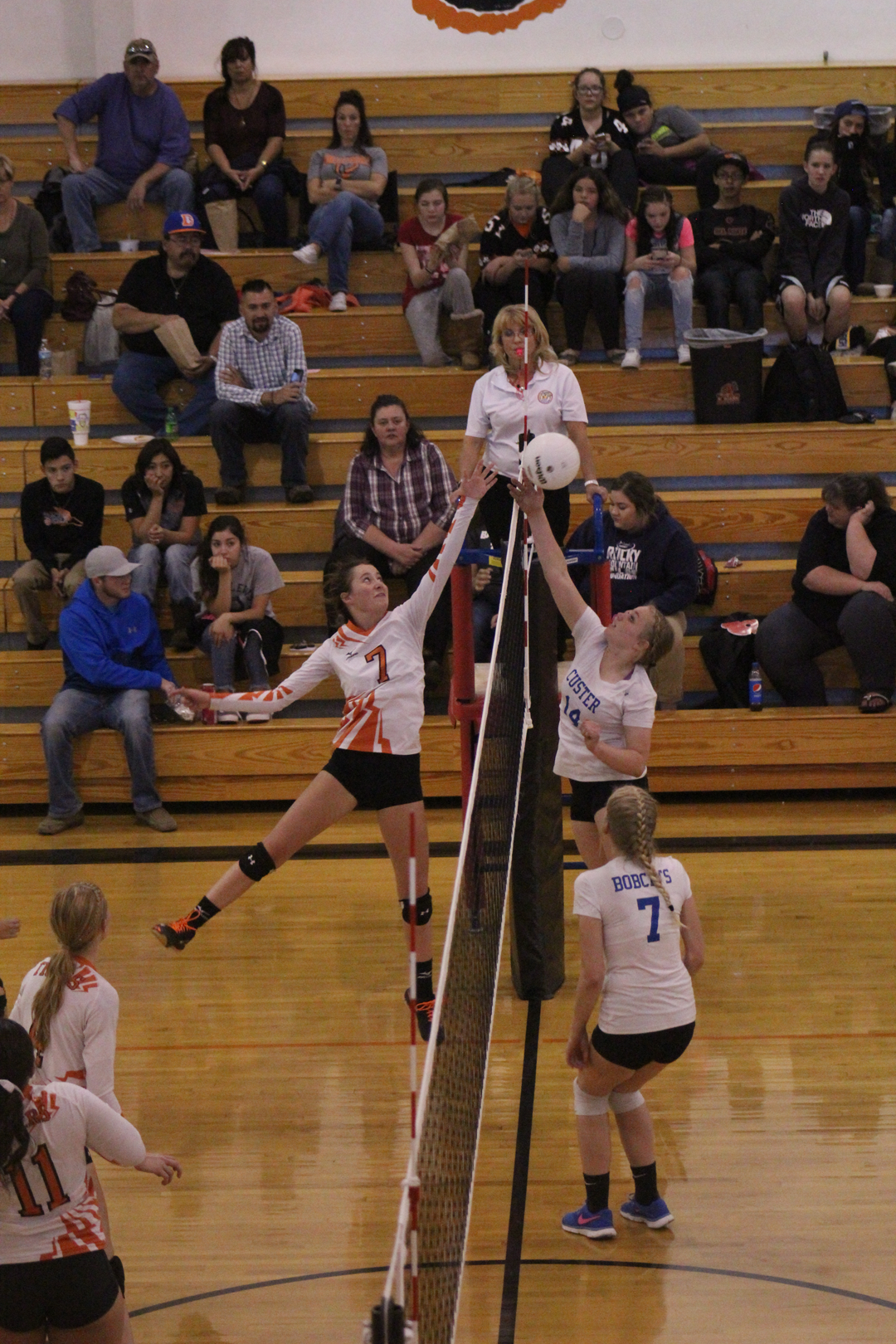 The Tigers got going quickly, running away with the first set by a score of 25-16. In the second set it was more of the same when Del Norte opened up a 11 point lead after going on an 8 point run before closing things out by a score of 25-13. It looked like it was going to be an early night when Del Norte out paced Custer County to a 24-19 score in the third. Custer County then rallied back to make things even at 24 and the girls battled back and forth all the way up to 28-26 with the Bobcats taking the third set and forcing a forth.

After tying at 18 neither team seemed willing to yield and they traded side-outs back and forth to 21-all. Then Del Norte found the difference-maker scoring on their serve to put themselves in position to win. After forcing the next side-out they got the game winning kill to skim Custer County in a 25-23 set closing the night 3 sets to 1.

Offensively the Tigers were led by freshman Myka Glover who posted 11 kills off her 29 attempts followed closely by junior Lacie Jones going 10 for 28. Glover and Jones shared the team lead in blocks with one a piece. From the service line it was Sophia McConnell who posted 4 aces for Del Norte.

For the Bobcats McKensie Penkoff posted 13 kills she also lead the team in Aces with 4. Elizabeth Mullett followed Penkoff in kills with 12. Mullet shared the team lead 3 blocks with Haylee Hytterer.

Del Norte gets another test right away when they host the Swink Lions this Saturday at noon. The Lions are 12-3 and currently own the District 6 league and a number 5 ranking in the state.