Community comes together to construct a mural

ALAMOSA — After over a year of planning, Main Street Alamosa will soon be home to a new mosaic mural built by local artists and community members. Artists Kasia Polkowska and her partner Kyle Cunniff, who moved to Alamosa last August, got the idea for the mural when they lived in Denver and saw artwork along the Cherry Creek Trail.

In their minds the unkempt status of the trail didn't match the quality of the work seen so they wanted to help beautify the area.

"The lotus flower is something that grows in murky, muddy water and it's a really beautiful, pure flower," said 33-year-old Polkowska. "We thought putting something like that in that area would inspire people to take care of the area instead of trash it."

However, the project never went beyond the design phase. Yet after the recent ArtScape program—for which Polkowska and Cunniff made the matryoshka doll—they were motivated to try again. Originally they wanted the 6 feet by 6 feet glass lotus flower outside of Milagros Coffee House but they ran into logistical issues. 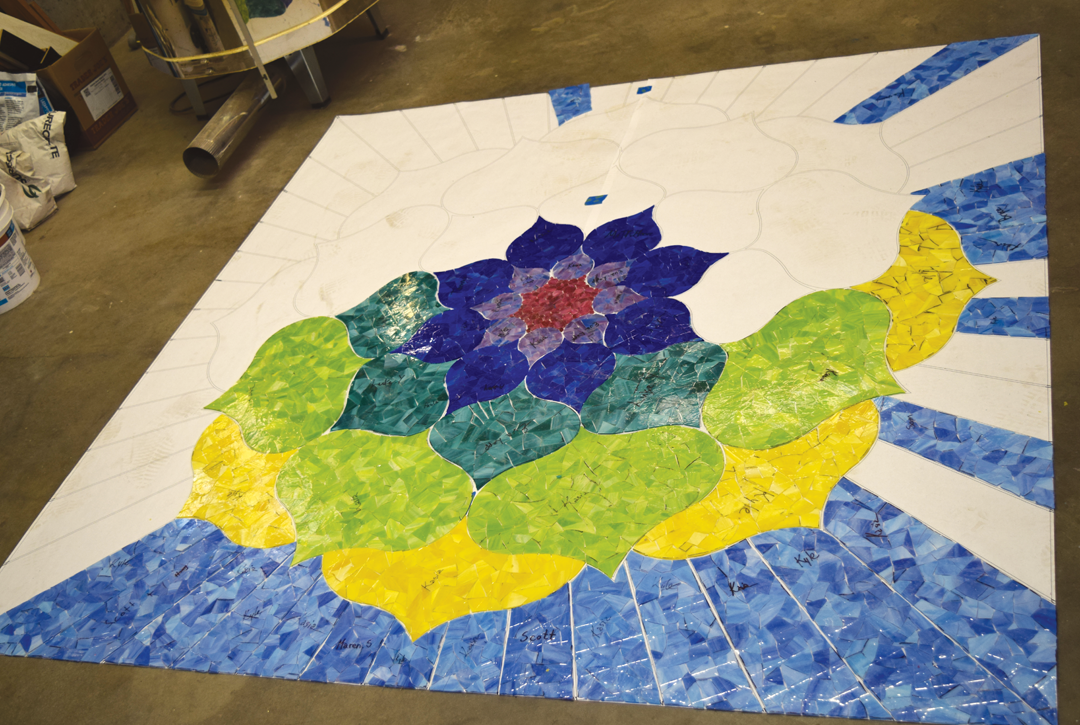 Looking across the street they set their sights on the Center for Restorative Programs at 500 State Avenue. Jeff Owsley of the San Luis Valley Small Business Development Center put them in touch with CRP Director Luke Yoder. He was receptive to the concept, but because the building is designated as a historical landmark the outside can't be permanently modified.

Cunniff, 33, is an industrial and product designer by trade so he created a removable base for the mosaic mural. While it tripled their planned production costs, they were able to get the project approved since the base attaches to the mortar of the bricks.

Because the Valley is a remote area, the duo reached out to members of the public for the unique opportunity to create art. "If you live in the big city you can find art classes everywhere," said Polkowska, "so we wanted to share out talents with the community."

So far roughly 15 people have contributed to the piece over the past two weeks and they hope to have around 30 by the time it's completed at the end of the month.

Giacomo Butler, their 30-year-old neighbor, stopped by Wednesday night to check it out. "It's fun, because you get to break glass," Butler said. "Who wouldn't love to smash glass?"

Others, like physical therapist Corrie Jones, 31, pictured above, heard about the project through social media and word of mouth. "It takes some time to figure it out but it's really cool," she said.

Having helping hands also speeds up the process so that it can be finished before it's too late. Polkowska is due to have a child in October and they didn't want to postpone the mural to next spring.

Each volunteer is given a template, such as a single petal, that they then fill in with the colored glass. No artistic experience is required as Polkowska educates them on how to use the special tools to score, cut and break the pieces just right. 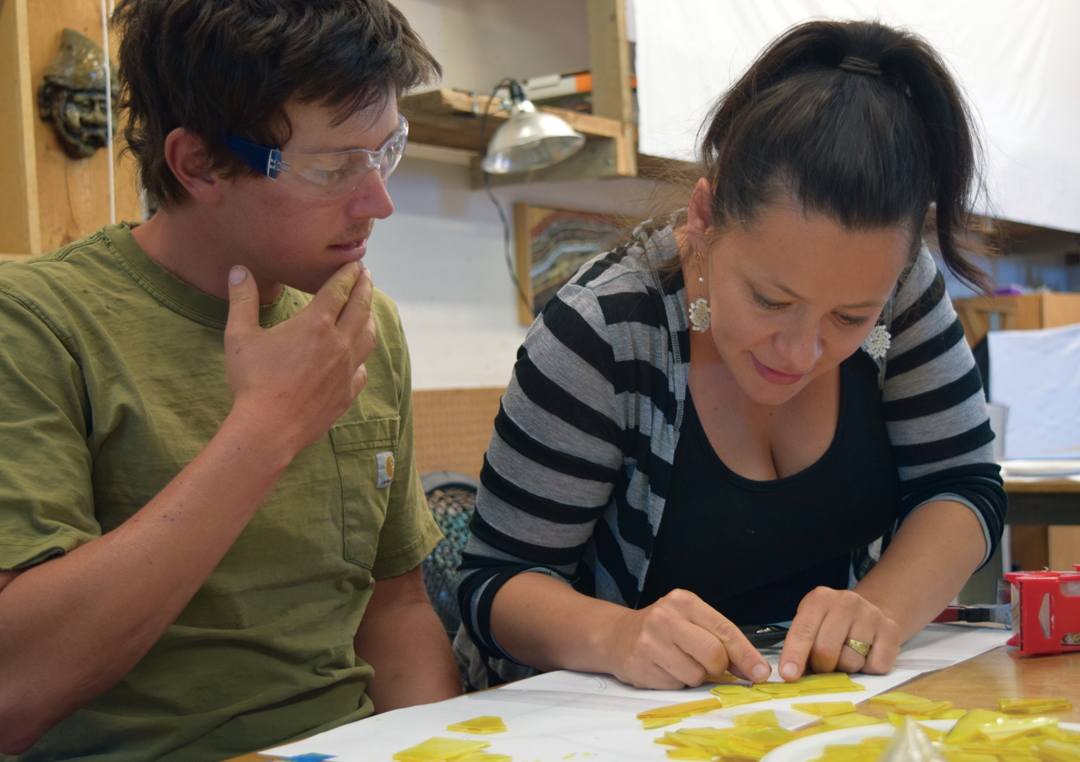 Artist Kasia Polkowska, right, instructs her neighbor Giacomo Butler on how to align the mosaic tiles for a community made mural.

"It's not exactly like paint by numbers," she said. "I'm more of a conductor. This is more spontaneous while my other works are more planned out."

Before living in Denver for nine months Polkowska taught mosaic classes around the country. Originally from Poland, she and her family moved to New Jersey in 1993 when she was 9 years old. She got her Bachelor of Fine Arts in painting from New York's Pratt Institute, where she also met Cunniff, in 2006.

Working at a stained glass and mosaic tile studio in Manhattan convinced her to change mediums. Though she studied it for four years, mixing paints lost its appeal.

"There's none of the uncertainty."

They eventually moved to Vermont to work on a sheep dairy farm after eight years of subway commutes and windowless buildings. "We lived a very dark life and really wanted a drastic change from the urban hustle," Polkowska said.

Six months later they stayed in Chicago for about a year, where Cunniff's family is from, before missing the mountains too much and moving to Boulder.

In 2015 they uprooted themselves once more and lived in a van to teach classes around the country for a year before settling in Denver's Santa Fe Art District. "The worst was driving from Maine to Michigan for a class."

The couple is happy with their new home in Alamosa. "[Denver] was cool but overwhelming," Cunniff said. "The cost of living was really high. Here, the larger studio has enabled us to do bigger projects like this. There's no way we could have done something like this living in a one-bedroom apartment."

The artists hope the work will launch a new mural program for the city.

"We just want to show people what they can do," said Polkowska.

People interested in helping create a lotus petal can visit the studio at 619 Third Street tonight from 6 to 8 p.m. or on Saturday and Sunday from 10 a.m. to 1 p.m. There is also an Indiegogo campaign to help cover the cost of materials.