“We want to thank you so much for your hard work and dedication you have provided to the city over the years,” Alamosa Mayor Ty Coleman told the judge before City Clerk/Court Administrator Holly Martinez presented a plaque of appreciation to Judge Powell.

“We greatly appreciate everything you have done.”

Powell has served as Alamosa’s municipal judge since January 2010.

In observing the judge in the municipal courtroom, Mayor Coleman said, “you were always fair, honest, genuine and sincere with people.” Coleman said the judge would often tell his own story of overcoming difficulties and challenges, as he was not “born with a silver spoon in his mouth.”

Coleman added, “The main thing was he had to work hard to get where he was today. Hard work works.”
The mayor thanked Powell for his commitment and dedication and for treating people with dignity, decency and respect. Coleman said that with what the city and Judge Powell had to go through following a report this fall from the ACLU (American Civil Liberties Union), he had noticed the strong support from law enforcement and others on behalf of Judge Powell. Many Alamosa police officers lined the room on Wednesday to honor the judge.

“That shows that our law enforcement officers believe in you and they have confidence in you,” Coleman said.

City Prosecutor Gene Farish said he has served as city prosecutor for about 30 years and seen many changes, “and it’s been a real pleasure to serve in Dan’s court.”

Farish said the judge had a talent to remember every single defendant’s history. Farish said contrary to some reports published recently, he had seen Judge Powell treat defendants respectfully with a genuine interest in what the defendants had to say.

“It’s been an honor to serve in your court, judge,” Farish told Powell.

Likewise, Gordon Bosa said he had known Powell long before he was the city judge and they had shared an office together. He said even though he has been in the legal profession longer, he learned much from Powell, and Powell had a great influence on him.

Like other speakers, Bosa said the courtroom demeanor he witnessed did not coincide with the ACLU report. He said Judge Powell was very fair and respectful.

Martinez said she started in the municipal court and Judge Powell was very helpful. She said although she was sad to see him go, she hoped he would enjoy retirement.

Powell said he will be relocating to Wyoming where he has friends who are like family. Powell moved to the San Luis Valley in 1995 after spending 12 years in the Denver and Boulder area. He ran the legal aid office in the Valley and Trinidad.

“I feel very privileged to have had a chance to work in Alamosa,” Judge Powell said. “I have enjoyed my time in the Valley.”

The judge thanked the police officers for their support, especially recently.

“It’s meant a lot to me,” he said. “I have felt very privileged to work with each and every one of you in this court.”

Alamosa Police Captain Sam Maestas told the judge, “It’s been an honor. I appreciate everything you have done for the police department.” 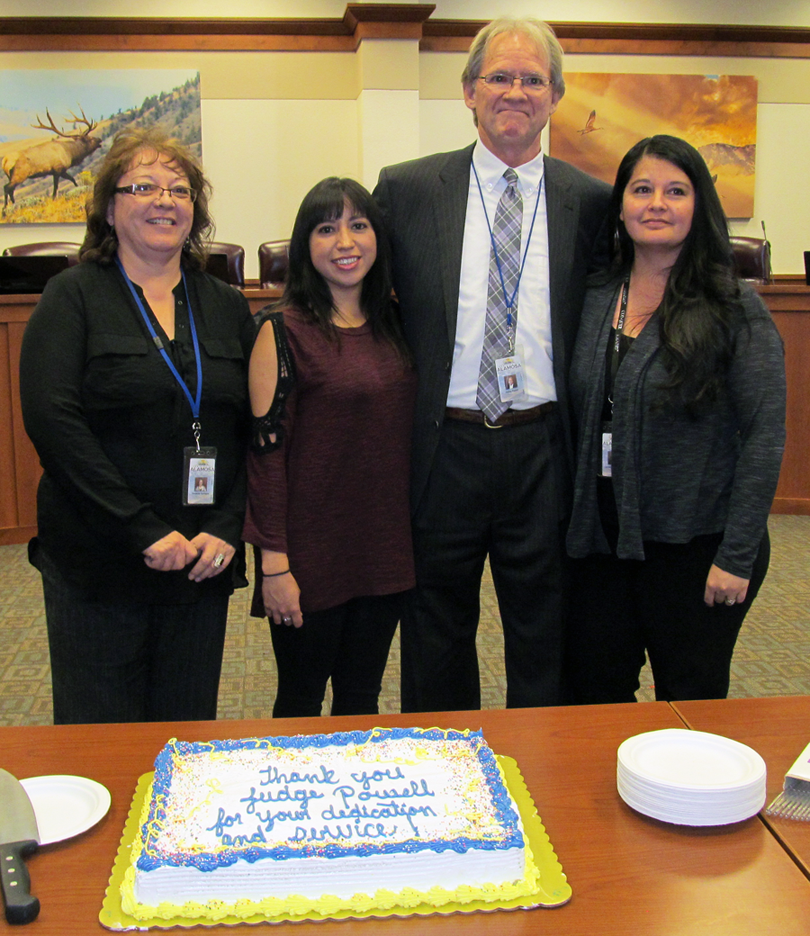 Alamosa City Manager Heather Brooks thanked Judge Powell for his years of service and dedication. She said she was impressed with his fairness, objectivity and professionalism. She said what she observed was that the judge tried to reach offenders and help them change in a way that also kept the victims in mind.
Brooks also commended Judge Powell for the improvements he had made in the municipal court system and improvements he began that were still in the works, such as alternative sentencing.