ANTONITO — The Sangre de Cristo National Heritage Area, Colorado Preservation Inc., The History Colorado State Historical Fund, and the Town of Antonito are pleased to announce that Phase I of the exterior restoration is complete.  A new roof, rebuilt chimneys and a full-scale door and window restoration were all included in the scope.  Phase II will begin in the spring to include extensive masonry work on the rhyolite stone and mortar.  The historic D&RG Depot is located at 307 Main Street in Antonito.

Beginning around the late 1870s, the Denver & Rio Grande Railroad (D&RGRR) began extending rail south from Alamosa, for services to the south and to the west, and was looking for a site to build a new depot that would provide terminal services for these two lines near present day Antonito.  The D&RGRR purchased the property in October 1880 that was first known as San Antonio Junction. Antonito soon became the name of the town, which means little Antonio or Anthony in Spanish. The new depot was at the juncture of rail lines servicing freight and passengers headed south for Santa Fe along the Chili Line and similarly for travel west to Durango and Silverton extending over Cumbres Pass and into New Mexico.

The depot was constructed in the 1880s utilizing distinctive, locally quarried, exterior lava (rhyolite) masonry, interior lath and plaster, hip roof construction and was encompassed by a large wood platform providing access to both rail lines. The significance of the depot to the town of Antonito is evident in the fact that all of Antonito’s original buildings were constructed to face the station.  The depot was remodeled in 1917 and added a new waiting area, which allowed for separate men’s and women’s waiting areas and restrooms, a ticket office and baggage/freight area. Use of the depot was extensive before it ceased providing services in approximately 1951.

The Town on Antonito acquired the depot from Union Pacific in 2002 and has been working on the preservation of the building ever since. This building was officially listed in 2007 as one of Colorado Preservation Inc.’s Most Endangered Places. The town of Antonito has formed a partnership with Conejos County Commissioners, Los Caminos Antiguos Scenic & Historic Byway,  the Sangre de Cristo National Heritage Area ,the Friends of the Cumbres & Toltec, and Permian Basin Railroad (known as the Antonito/Conejos Railroad Heritage Alliance) to help the town with preservation plans, grant writing, and fundraising. This current revitalization was accomplished with the collaborative work of Colorado Preservation Inc., The Town of Antontito and the SdCNHA with Schuber-Darden Architects and Empire Carpentry as the contractors on the project.

“The D&RG Depot in Antonito is the type of project that CPI’s Preservation Services Department is set up to support. Located in a small town, this unique gem of a building tells the story of development and railroading crucial to the town, the valley and the region. By providing project management to the Town of Antonito, we are helping to ensure the ongoing preservation and ultimate “Save” for this Colorado Endangered Place,” said Cindy Nasky, preservation services director, CPI.

“We are happy to take part in preserving another historic building integral to the stories and lives of residents in Antonito and throughout the Sangre de Cristo National Heritage Area,” said Tori Martinez, executive director SdCNHA. To find out more about this year’s Heritage Grants visit www.Sdcnha.org.

The project included the restoration of 20 windows and 18 doors, along with the interior and exterior of the sashes and frames. The old deteriorated roof was replaced with a new roof and a restored galvanized ridge. The fascia and surrounding woodwork and braces were also restored, along with the exterior woodwork.

The rail heritage in the state of Colorado is vast and varied and needs to be preserved for the education and enjoyment of future generations. Antonito, in particular, was an important stop for narrow gauge rail traffic that spanned the state from Durango, Alamosa, Walsenburg, Pueblo, Colorado Springs and Denver.

“This depot has historic significance in the area not only during the Narrow Gauge Steam Train  Era, but also during the inception of the current Regular Gauge Era. It is an important piece of the Sangre de Cristo National Heritage Area that should be preserved. It is my opinion that this type of project is what the Sangre de Cristo National Heritage Area’s mission is all about and we should do all we can to protect and preserve before continued irreparable damage occurs,” said Robert Rael, executive director of Costilla County Economic Development Council, Inc. 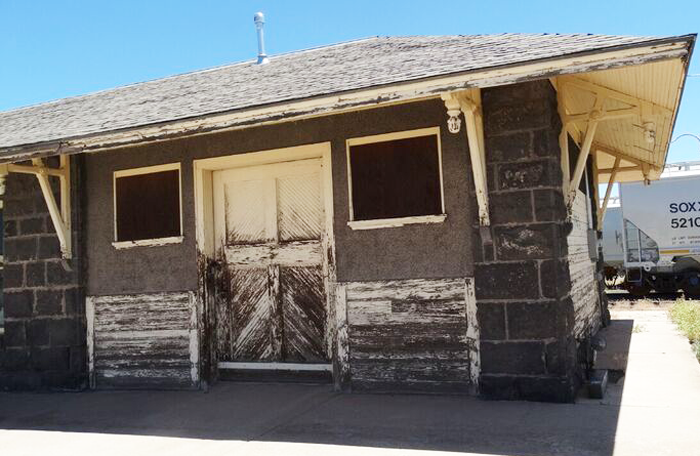 The Antonito Depot before restoration 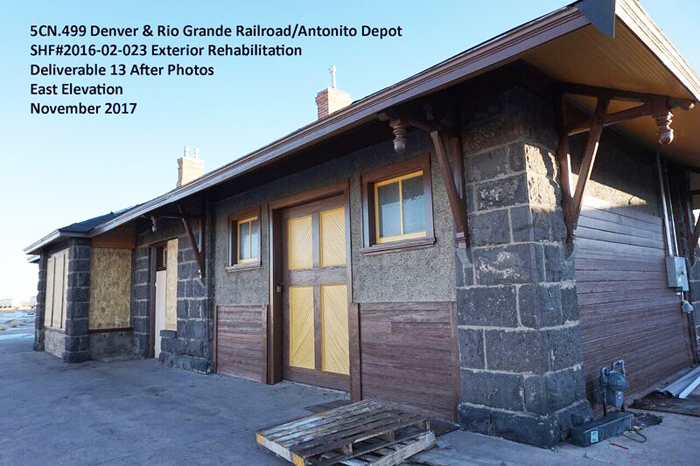 The Antonito Depot after restoration