Alamosa sophomore Daniel Bautista attempts to work the ball up the sideline by a Bayfield defender in Saturday night's loss .

ALAMOSA— Alamosa hosted Bayfield for their first night game of the year and fell 2-1 getting swept in the league series 0-2.
Alamosa has built something of a streak these past few games taking down Montezuma-Cortez and Telluride and tying with Pagosa Springs, building some momentum for their second game against Bayfield who they took into double overtime just last month.

Bayfield was also looking good in their last three outscoring opponents 10-2 and going 2-1 their one loss coming to Crested Butte. 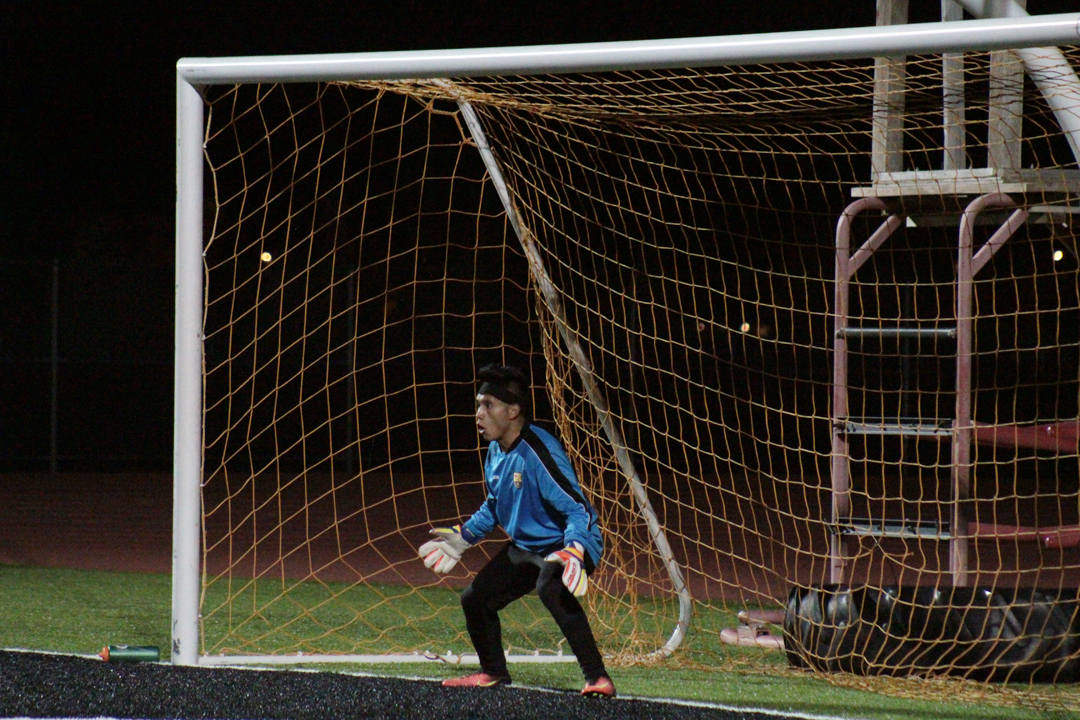 Jose Mateo-Andres stands poised and ready as he attempts to defend Alamosa's goal from a free kick late in the game Saturday night.

Alamosa was down two goalies having lost both to concussions. Offensive standout Jose Mateo-Andres put on the gloves and stepped in net for the Moose.

The first half was eventful and the two teams traded shots back and forth with neither finding the net. Mateo- Andres did very well filling-in getting 3 crucial saves in the first half while sophomore Antonio Esteban and junior Miguel Guerrero each registered a shot on goal.
Bayfield broke the tie with a last second shot from senior Colton Fine that put the Wolverines up with a second to play in the half. Coming out in the second half the Mean Moose didn’t show any signs of pressure that one would expect from a team being outshot and behind on the scoreboard. Instead they are a team that thrives in the second half, in fact the Mean Moose has scored 64 percent of their goals after the midway point.
Both Alamosa and Bayfield came out shooting in the second stanza, Alamosa with Esteban pulling the ball wide and Bayfield with Fine getting robbed by the crossbar.

It was Esteban who found the net next coming in hot on a rush and evening things up midway through the second half. As the time dripped off Alamosa looked to be in position to break the tie when Guerrero pounced on a loose ball and was streaking all alone until Bayfield’s Chad Winkler came out of net to confront him disarming him with a well placed slide tackle.
When play immediately went the other way Mateo-Andres was injured coming out to confront speedy Bayfield senior Marcus Isiordia. Isiordia drew a foul on the play giving Bayfield a direct free kick with under 4 minutes to play, which Tilden Berriman fired past a hobbled Mateo-Andres to grab the Wolverines second and final lead.

Alamosa will go on the road later this week to face Pueblo Central before closing out their season with two tough home games against Ridgeway and Salida.