By: Joel Priest - Updated: 4 years ago

Turnabout plus one on the soccer pitch, however…could have postseason implications.

And even if Lily Lavier didn’t know that Alamosa’s production Tuesday afternoon, preceding her 79th-minute penalty kick, had pulled the Mean Moose even with Bayfield in head-to-head goal differential, she didn’t appear to put any undue pressure upon herself as she stood over the ball 12 yards away from BHS senior goalkeeper Kailee Millard.

And upon hearing the referee’s whistle, the AHS freshman calmly zipped her shot to Millard’s right, setting off a hard-earned celebration and securing a 3-1 road win inside Wolverine Country Stadium—more than avenging a 2-1 loss at home only four days before.

“I just want to congratulate the girls and really emphasize that they worked as a team,” said head coach Kara Bentley, in her first season helming the program. “They really have a ton of heart, and that’s kind of been since Day 1 when I took over.”

“A team-first mentality; these girls fight for one another. That’s why we’re winning games.”

One of Colorado’s wickedest weapons in any prep classification, Alamosa junior Katie Parkins broke the ice finishing a 16th-minute breakaway, and after both 3A/2A Intermountain League squads settled in for the long haul and went into halftime with just one goal on the scoreboard, Parkins struck again in the 47th.

Lady Wolverine Savannah Kaufmann, who’d netted both Bayfield goals—including a penalty kick—in the sides’ previous clash, put an attempt past junior Ashley Ramirez in the 50th to prevent a shutout but knowing not to panic, the Moose refocused their attention on the junior forward and were willing to activate their own offense from deep in their own end if needed.

“We wanted to shut their best players down, and Aleceya [Tolsma, a sophomore] and Raquel [Kunugi, also a sophomore] really worked hard on Number Seven [Kaufmann],” said Parkins. 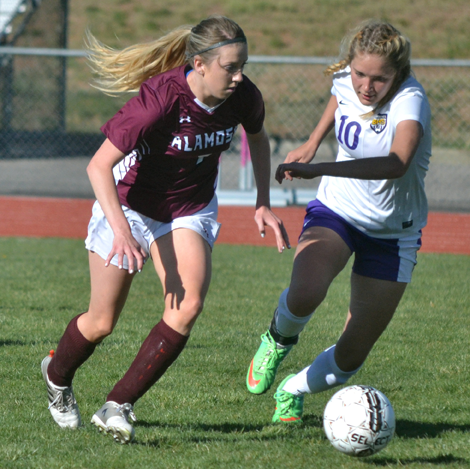 “And we also really wanted to work on ‘indirect’ soccer instead of ‘direct’ soccer; we were trying more to get it back to our defense so they could send it up, and that worked really well today.”

With fewer than six minutes left in regulation, Ramirez logged back-to-back saves on Kaufmann and sophomore Caibri Schaefer—Bayfield’s best two chances, as it turned out, before time expired.

“She was under some pressure today, and she saved a lot of balls. I’m really proud of her,” Parkins said.  “She’s really getting underneath the ball and she’s really focused—when she gets nervous she shakes it off.  Ashley’s doing great.”

“First half…we got a little complacent with being ahead, for sure,” admitted Bentley. “I think the difference today was we really played from our heart.”

Up next for the Moose (7-2 overall, 6-2 versus the combined IML) will be a visit Friday from non-league 3A Rye, with kickoff at 4:00 p.m.  A rematch with Pagosa Springs—1-nil winners at AHS in the first meeting—follows on the 25th at PSHS’ Golden Peaks Stadium. 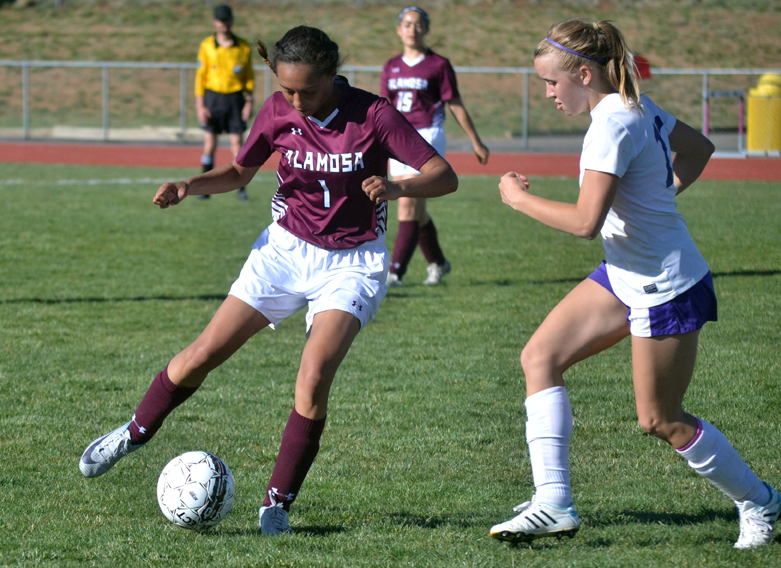 “Against Pagosa, we could have beat them 4-1,” recalled Bentley. “But with that being said, we’ve got to play like we played today and I think good things will come for these girls.”

“We’re hoping to go out strong next time and get it back!” Parkins stated.