Sierra Grande senior Arthur Rodriguez floats a shot from the perimeter. Rodriguez had another great night producing 37 points and hit 5 shots from outside the arc. Rodriguez and the Panthers will face Creede's Miners today at 3:30 p.m.

ALAMOSA — Friday evening fans of 1A basketball poured into Plachy Hall to watch the district finals untangle themselves. In a packed ticket Sierra Grande and Creede advanced from the boys’ bracket for the championship game. The girls of Antonito and Sangre de Cristo dispatched their opponents in the semifinals to set their 1A final.

The first game of the evening was a girls’ game between Sangre de Cristo and La Veta. These two teams got reacquainted after their first meeting of the season taking place less than a week prior. In their Feb. 17 meeting Sangre de Cristo won handily, Friday night the T-Birds posted similar numbers with another easy win. 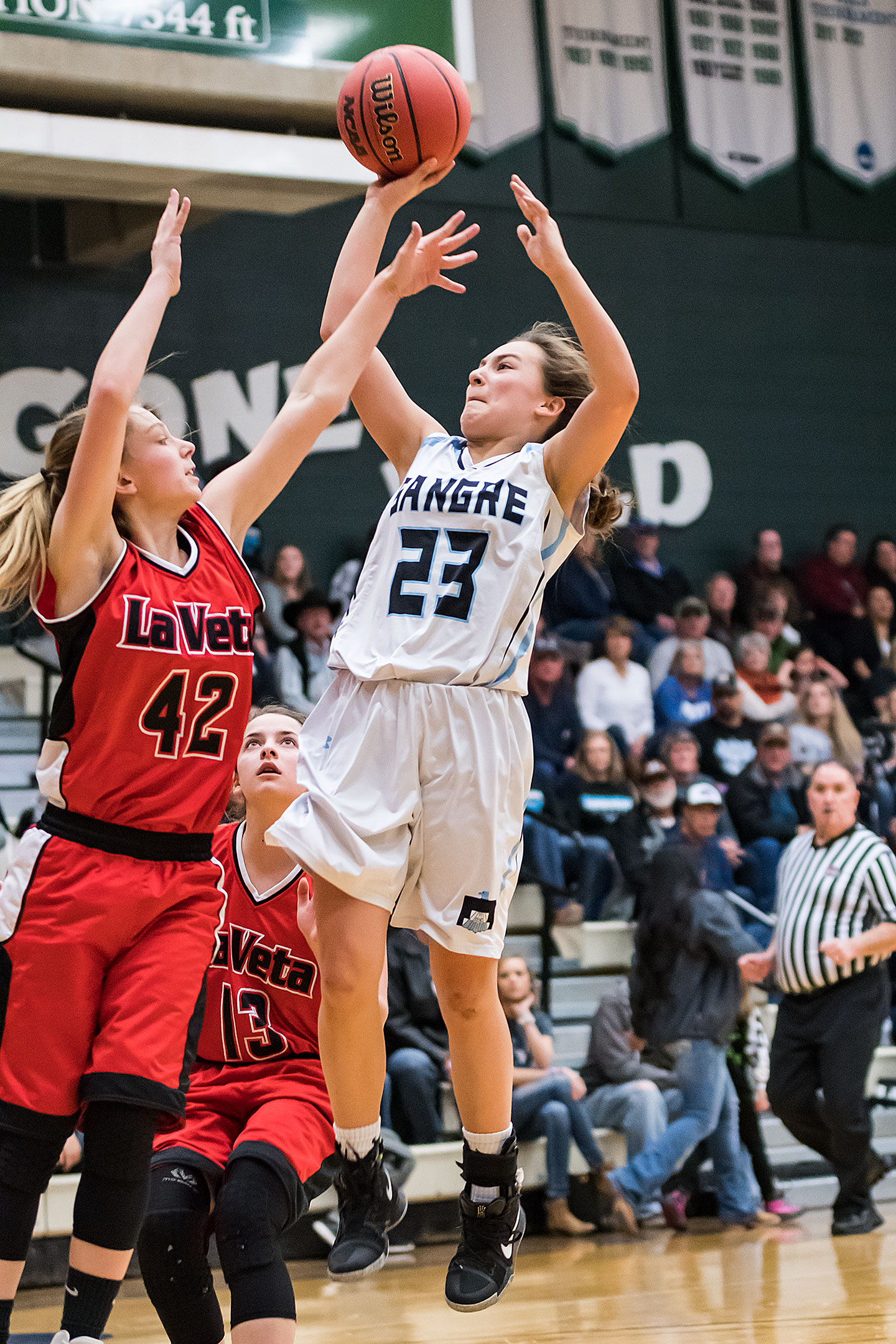 Even with six girls dressed Sangre de Cristo has had little trouble outpacing most opponents all season.  Their dominance looks to continue into the postseason. The two heavy hitters from up north showed out again on Friday night. Kylee Christensen and Jessica Slane stayed hot to help advance Sangre to the title game. Slane posted 19 and Christensen netted a team leading 21 hitting four from downtown in the process propelling Sangre de Cristo to a 61-29 win.

Up next was first of the two boys games, the anticipated meeting of the Sierra Grande Panthers and Sangre de Cristo’s Thunderbirds. The Panthers and T-Birds would miss each other at the Thunderbird Shootout at the start of the season, their first meeting taking place on Feb. 16. On that day the Panthers came up big with a 57-51 win to hand the T-Birds their third loss of the season.

Friday night both teams got off to similar starts with a 21-18 first quarter in Sierra Grande’s favor. Sangre would stumble first with an anemic second quarter managing 8-points and going to the half 40-26. The Thunderbirds would get back into it when Sierra Grande slowed producing seven third quarter points.

At the start of the fourth 6 points separated the competitors. Sierra Grande would turn that 6-point lead into a 67-57 win. Sangre de Cristo found some hot spots on the court with 7 team 3-pointers. It would not be enough to keep pace with the one man wrecking ball Arthur Rodriguez. Rodriguez buried 5 from outside the arc and amassed a team leading 37 points, far surpassing his state ranked average points per game.

The third event featured the other half of the girls’ bracket in which Antonito met Sierra Grande. Their last meeting on Jan. 19 resulted in a 61-51 victory for Sierra Grande. Antonito’s pair of Erykah Tallman and Joslyn Garcia showed up under the bright lights of Plachy Hall combining for 34 points. Garcia led the Trojans with 19 collecting a trey and going 2-of-4 on her freebies.

The Panthers leaders were noticeably quieter, neither Abby Corona nor Nina Vigil broke double digits in scoring on the night. Annahy Quezada stepped up in the void and performed admirably for Sierra Grande. Quezada averages 5.7 points per game in recorded games.

On Friday night the Sierra Grande junior would surpass that number. Quezada posted one of the best games of her season with 11 points off the bench to lead the team. A slow second half for the Panthers and Trojan consistency lead to a 63-33 final in Antonito’s favor.

The final event would complete the boys’ bracket. Creede took on Primero’s Bulldogs. Their first game was a tight competitive meeting with the Miners taking a five-point game on Jan. 13. Friday night Creede would pace the Bulldogs all night. Isaac Borchers took the scoring title for the Miners with 21 points hitting 9 of his 13 free throws. Another pace setter for Creede was Casper Freedle who opened his night with three straight buckets from downtown to collect 13 points in the game.

With the semifinals complete Saturday will see another bonanza of basketball at Plachy Hall. Refer to the Courier Sports Bulletin or CHSAAnow.com for full scheduling information concerning valley 1A basketball.